Turning Monsters and Mini-golf Into a Successful Franchise

In just six years, the evil spawn of monsters and mini-golf has lumbered its way to 26 franchises in 12 states.

By Jason Daley September 20, 2010
This story appears in the October 2010 issue of Entrepreneur. Subscribe » 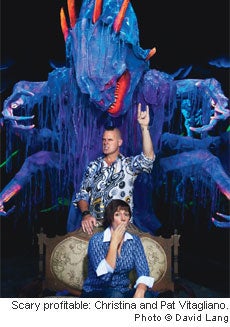 Christina Vitagliano has always specialized in haunted houses of one sort or another--as co-owner of an auction house in Danielson, Conn., she was knee deep in creepy antiques, family feuds and restless spirits. "You deal with a lot of people, and it's a negative business," she says. "Somebody's passed away and other people are fighting over whose stuff is whose so they can sell it."

After five years, she'd had enough and sold her share of the business, which left her with no cash flow and a lease on the spooky, dilapidated mill that housed her auction house. Her solution? Mount some black lights, build papier-mâché monsters and turn the big, open space into a haunted mini-golf course.

By the end of Monster Mini Golf's first summer in business, in 2004, the glow-in-the-dark puttery had people lined up out the door to bank shots off of Frankenstein's feet. Vitagliano opened a second location near Providence, R.I., and then the biz just boomed: Monster Mini Golf now has 26 franchises in 12 states and its own monster-making shop. Recently, Vitagliano inked a deal to develop a rockin' KISS-themed Monster Mini on the Las Vegas Strip. She stepped away from the guillotine long enough to tell us how she did it.

How did you get this idea?
I just tried to think of the exact opposite of what I was doing at the auction house--something happy and fun that doesn't involve inventory and has a very high profit margin. We were coming home from a weekend in New York and I told my husband, Pat, "I think I got it--mini golf!" I don't know where the idea came from.

Where did the monsters fit in?
Pat asked if I wanted to work outside in the summertime, handing out putters all day, and I'm, like, no. So I came up with bringing it indoors and adding black lights and making it cool. The monsters came in because I could make them. With a train or car theme, you'd have to buy props. Monsters are whatever you want them to be.

Are all the courses the same?
No, every course is custom designed. All the art is hand-painted. The franchisees get to say what monsters they like and we give them a choice of big animatronics. I'll research the town and get a little history on the course, and anything the franchisees used to do for a living, we'll turn into a monster version. We have a lot of retail themes, like Abercrombie and Witch. Our construction company, Twisted Toy Box, manufactures our monsters.

How did you get involved with KISS?
On our 18th hole, you golf onto Glozo the Clown's tongue and we always joked that Glozo is our version of Gene Simmons. But over the years, I thought "Boy, you know? What a great idea." So at the end of business meetings, I started to ask everyone if they had Gene Simmons' cell phone number. One day, somebody did and after about a year of negotiating, we signed our deal. It's going to be all these cool KISS monsters. And on the last hole, you'll golf up the tongue of a monster version of Gene Simmons.