Despite the Slowdown at Home, U.S. Franchises Expand Abroad

Many American franchises are not only surviving the recession but thriving in it by expanding their operations globally.

Two years ago, Matt Friedman, co-founder and CEO of the 100-unit, Atlanta-based restaurant chain Wing Zone, took a hard look at the U.S. franchise market and didn't like what he saw. "We realized that, though our stores were performing well, our domestic expansion was going to be limited based on the credit crunch," he says. "We started asking what other growth avenues we could follow."

Friedman decided that while the U.S. franchise market was stuck in its malaise, the best thing for his company to do was let the rest of the world pit their taste buds against his Nuclear Wings, and last November, the company opened its first restaurant in Panama City, Panama.

But it was not a decision Wing Zone made lightly. Entering into international operations adds levels of complexity to a franchise organization, and it takes a hefty outlay of cash. It also takes deep research into new markets, months or years of tweaking and, of course, there's the risk that a bad international experience could drag down domestic operations.

"To go international takes a large financial commitment, and there are not going to be immediate returns," Friedman says. "We knew it would probably be a two- to three-year process to turn a profit."

Despite the risks, Wing Zone is not alone in looking west--and east and south and north--for growth opportunities. "In the last few years, U.S. brands began saying, ‘Wait a minute, we've never looked anywhere else, but maybe we ought to,'" says William Edwards, an international licensing consultant in Irvine, Calif.

Now, many of the international expansion plans born in the depths of the recession are reaching fruition. 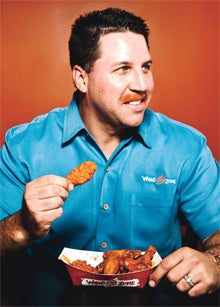 "2011 has started out as a boom time for international franchising--and not just for food. Service brands, retail, children and management education are all going international," Edwards says.

No one is tracking exactly how many businesses are adding global elements, but companies like Massage Heights, the fire and water cleanup companies PuroClean and Servpro, Molly Maid and the fondue restaurant Melting Pot have all gone abroad in the last couple of years, and established franchisors have ramped up their international efforts.

Recently McDonald's, Dairy Queen and California Pizza Kitchen, along with dozens of other franchisors, have pushed hard into China. Malaysia, India, Indonesia, South Korea, Brazil and Vietnam are all attracting American companies, and they aren't just random spots on the globe. According to Williams, these countries have key elements that allow American brands to succeed, including a GDP growth at 4 percent or above, and an emerging middle class with spending power.

A mall's worth of franchises have even announced plans to open in affluent parts of the Middle East, including Kuwait, Bahrain, the U.A.E. and Saudi Arabia. Some brave souls are even venturing into Iraq.

For smaller players--like Wing Zone, with fewer than 200 units--the idea of going global was not even on the radar a few years ago. But now they see it as a unique opportunity. Not only does it circumvent the financial problems in the U.S., it gives them a level playing field on which to build their brand. So instead of competing head-to-head in a crowded domestic market (in the wings world, that includes Buffalo Wild Wings, Wingstop, Wingstreet, Wings n Things, Hooters, Planet Wings and Wingman, among others), smaller franchisors are finding that building their reputation in countries hungry for Western brands and without the scrum of competition is a smart move.

"Buffalo wings haven't gotten to other parts of the world, but chicken has, and a taste for spicy food," Friedman says. "This is an opportunity for us to be the first in the market. I wouldn't trade it for anything. We're in a prime position for Wing Zone to grow aggressively internationally."

The Little Gym, a noncompetitive children's learning and physical development program that began franchising as The Little Gym International in 1992, learned the first-to-market lesson early on. Serendipity in the form of two interested Thai investors led them to open their first international franchise--something that was not in their business plan--only three years after launching. But that experience set the direction for their future growth: Now the company is an experienced overseas operator with 300 locations in 21 countries.

As other child-focused brands are beginning to make overtures toward Asia and other areas to boost their growth, The Little Gym is already positioned to ramp up its international efforts and be the first to enter those lucrative markets. The company recently furthered expansion into the Middle East, signed master franchise agreements for India and Mexico and opened a location in China, with plans to open as many as 100 there.

"The challenges of access to capital here in the United States over the last couple years have slowed our domestic growth and made it appropriate for us to focus on international growth," says Bob Bingham, president and CEO of The Little Gym International. "We feel fortunate that we have a brand that works well in other countries. There's a huge appetite for American brands throughout the world."

For Wing Zone, which is just starting out in the global franchising world, finding the right location was the first step in expanding the brand. It needed to be a country that could appreciate the spiciness of hot wings, that had a delivery culture (the core of the Wing Zone concept), a fondness for poultry and the crucial middle-class element.

Panama fit the bill, but the Wing Zone concept still needed tweaking to fit the culture. The footprint of the restaurants was increased to 1,500 square feet and seating for 40 to 60 people was added, an element missing in the U.S. locations.

Of course, there were setbacks. They get their chicken locally, but keeping the kitchens stocked with all their other products and proprietary sauces was a problem, since those had to be shipped from the U.S.

But the 18-month lead-up to opening day gave them plenty of opportunity to make changes, and it paid off. The first week of operation in Panama City was the busiest week for any Wing Zone, foreign or domestic.

Friedman now has deals in El Salvador and the Bahamas, he has signed agreements with England, Ireland, Scotland and Saudi Arabia and he's signed on with one of Japan's most experienced franchising companies to open 50 restaurants in and around Tokyo.

Friedman's strategy in Japan, according to licensing consultant Edwards, is key to successful international franchising. "You have to look at your partners very carefully," Edwards warns. "If your licensee or developer doesn't do a good job, it can cause a lot of brand damage. In emerging markets, you have to do a lot more due diligence and find out everything you can about your partner's business history. Typically, you want someone who has developed a Western brand successfully before."

On the other hand, franchisors can't look at international area developers or franchisees as independent entities. They need to offer the same type of support and guidance they give to their domestic franchisees.

Friedman says he treats his Latin American Wing Zone franchisees the same as his domestic units, though they are held by a subsidiary, and he has made sure there is a local support staff that franchisees can rely on.

That's a lesson The Little Gym has embraced, too. "Our commitment is to give our international clients the same high level of support and service we give our domestic franchises," Bingham says. "Even though we might provide service differently, it's not less. It's a commitment we made, and that's what franchisees deserve from us."

Even if the domestic franchise market heats up again, it's unlikely that American brands will lose their taste for the international market. In fact, some iconic domestic brands are more international than American.

Yum! Brands, which owns Taco Bell, KFC and Pizza Hut, earned 65 percent of its 2010 profits internationally, and expects that number to hit 75 percent by 2015. Over 60 percent of McDonald's sales are in the international market.

"I don't think international franchising will die down, even when the [U.S.] economy recovers," Edwards says. "For companies that have tested the waters, they've seen the faster growth international franchising offers. They've become comfortable overseas. Hopefully, they've had a good experience. And in the fast-growing emerging markets, the people still want U.S. brands."