How a Business-School Grad Became a Successful Franchisee

By Jason Daley September 6, 2011
This story appears in the September 2011 issue of Entrepreneur. Subscribe » 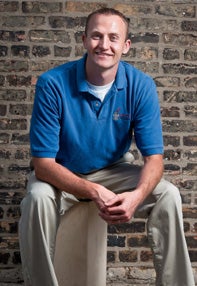 It's not the most common career path for a college grad, so when Dan Lundstedt told friends and family that he planned to clean grout after graduation, he got a few strange looks. But the University of Illinois, Urbana-Champaign business student was intent on launching a Sir Grout tile-cleaning franchise. So in March 2008, a few months after commencement, he moved to the north side of Chicago and began scrubbing and sealing tile lines. A little more than three years later, he has two vans, four technicians, a sales staff of two and a lot of happy customers.

Lundstedt's fascination with grout didn't come out of the blue. The summer after his sophomore year, he went home to Connecticut, where his dad hooked him up with Tom Lindberg, a friend who needed a laborer for his new grout-cleaning business. Lundstedt liked the work and kept in touch with Lindberg and his partner, Jeff Gill, as the two franchised their business. As the end of school neared, getting into the grout game seemed like a good option.

"Tom left a great job in the corporate world," Lundstedt says. "I thought, if he can throw that away to start up a business, I, who had nothing to throw away, could start a business, too."

Many of his customers and friends still ask why he decided to get into grout, but Lundstedt has no doubts it was the right move: For two years running, he's been Sir Grout's "grout man of the year," and business just keeps getting better. Here, Lundstedt shares the secrets of his success.

What sets you apart from other franchisees?
My work ethic. I will work seven days a week, 15 hours a day--until my wife hits me in the head. It's one of the main things that helped my business grow. Also, other guys get hung up on how much advertising costs, but I realized it's a rational investment. There are not a ton of repeat customers in the grout business, so you need a lot of customer lead generation. I found that if you spend a lot of money on advertising, there's a relatively solid payback. With the exception of the franchise owners, I probably spend more on advertising than any other franchisee in the system.

Why did you get into franchising?
Starting my own grout business would have been a blind leap. I knew with a franchise, I'd have some backing. I didn't know a thing about business law or contracts, and had zero experience except business school. I called Tom and Jeff once or twice every other day, and always learned new things.

How do you use technology?
I'm the leading franchisee in terms of getting online reviews. My main thing is not only keeping customers happy, but also asking them to write a review. Angie's List, Google, Yahoo and Bing all have areas where people rate businesses. But it's a tough market. If you can only make 98 percent of customers happy, that other 2 percent will go online and gripe. I'd rather go to a house 10 times to make a job perfect than just cut the strings and have an angry customer.

What was your biggest mistake?
Coming out of the gate thinking I knew more than I did. In the first six months, I tried doing everything myself, when hiring someone who knew what they were doing could have been more efficient.