After a Post-9/11 Slump, an Entrepreneur Turns to Franchising

By Jason Daley March 9, 2012
This story appears in the March 2012 issue of Entrepreneur. Subscribe »

In 1990, when pagers were considered high-tech, digital color printing was at the leading edge, and Greg Carafello, a former Canon employee, was capitalizing on it. That year he opened AbraCadabra Digital Printing in New York City.

"Our store just took off," he says. "It was all tech-based, so people would come in with files for us to print. Ad agencies were printing dummies they could never print cheaply before."

Carafello eventually pulled in $4 million per year with 39 employees at four branches in New Jersey and Manhattan, including a flagship on the 18th floor of the World Trade Center's south tower.

Carafello was at his flagship on Sept. 11; he escaped the building after the second plane hit. Losing the main branch of his business was bad enough, but Carafello also lost his best friend in the building collapse. He moved operations to a store in New Jersey, but with the loss of major WTC clients, the company's revenue slumped more than 75 percent. In 2004, Carafello decided to sell.

But not before he had gambled on a backup plan. A year earlier, he purchased the master franchise rights for Cartridge World, a new Australia-based concept that refilled old printer cartridges. In less than a decade as a master franchisee, Carafello has opened 38 stores in New Jersey, 11 in Maryland and Virginia and eight in upstate New York. He also has plans for 30 new stores in Manhattan. Here's how franchising rebuilt his career. 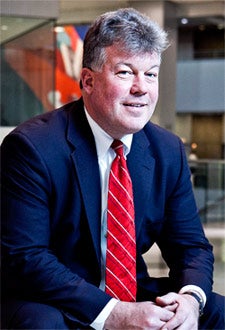 Greg Carafello was at his flagship on Sept. 11; he escaped the building after the second plane hit. Losing the main branch of his business was bad enough, but Carafello also lost his best friend in the building collapse.
Photo© David Lang

You're an experienced entrepreneur. Why go into franchising?
I was always anti-franchise. But you get tired when you're an entrepreneur on your own. You have lots of people working for you, but at the end of the night, it was still me sitting at the kitchen table, looking over brochures, making sure they were printed correctly. Back in '92 and '94, I tried selling recycled toner cartridges, sending them to a company in Nashua, N.H. But I couldn't get consistent quality. Then we had a bad batch of cartridges and almost lost our printing customers [because] they were so upset. Cartridge World had a proven product.

In my old business, everybody was tied into the profits of the store. It was like it was their own business. Drivers, clerks, managers--everybody worked liked they owned it. With franchising, it's the same model.

Any special considerations in conquering Manhattan?
Cartridge World's board of directors approved my "Manhattan model," where the retail space is only 300 to 400 square feet, versus the usual 1,500. We usually have a second office and warehouse somewhere cheaper. What I determined was that to have a successful smaller site, it needs to be located in a vertical space with at least 30 floors of businesses above that could use the service. We're also targeting hospitals, post offices and Staples stores. There are 18 Staples in Manhattan; they're a fierce competitor that does good demographic research. I figure, why reinvent the wheel? We want to go in right next to them.

Are printer manufacturers trying to shut you down?
The industry itself is creating roadblocks to make it harder to use recycled cartridges. It could be a download for new firmware, or a button you have to push before you can use other people's products. Buying a printer is like buying a car and having the manufacturer tell you that you can buy only Luke Oil gas. But printer companies do $80 billion in business per year, and Cartridge World does less than $1 billion. We're not even on their radar screens yet. Once customers find us, though, they love us, and they keep coming back.