By Jason Daley March 23, 2012
This story appears in the April 2012 issue of Entrepreneur. Subscribe » 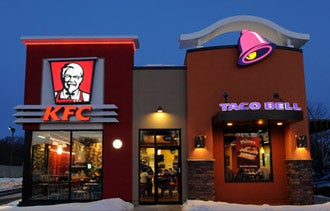 If you flip through annual reports from Yum Brands, you'll notice an increasing frenzy starting in 1992 around "multibranding." A decade later, Yum--the holding company that owns and operates Taco Bell, KFC, Pizza Hut and, until last year, A&W and Long John Silver's--hailed the concept as "potentially the biggest sales and profit driver for the restaurant industry since the advent of the drive-thru window."

Co-branding (also known as piggyback franchising and dual or combination franchising) is, at face value, a brilliant idea: Take two franchise concepts, stick them in the same building and watch the revenue roll in. Not only does co-branding promise to save on operational costs like leasing, staff, kitchen equipment, building maintenance and advertising, it can even out customer flow, especially if one concept appeals to the breakfast and lunch crowd and the other is destined for dinner. But franchise systems have touted co-branding's biggest advantage as providing a one-stop option for groups of people with different cravings. Tommy and Sally want chicken fingers but Mom and Dad want pizza? Come on in to our pizza parlor/chicken shack, and everyone will be happy.

In 2002, co-branded outlets accounted for $2 billion in sales for Yum. But just a decade later, Yum is quietly stripping down many of its co-branded locations, and in its 2010 annual report, hidden in the black-and-white financial section many pages beyond the color photos of smiling kids and well-groomed employees, the company admits it has suspended co-branding as a long-term strategy.

The last few years have been littered with corporate co-branding marriages that bit the dust. Wendy's asked Tim Hortons to the dance, but they broke up in 2006. Dunkin' Donuts tried to make it work with Togo's sandwiches, and Arby's fooled around with everyone on the block for almost a decade before deciding to stay single.

While co-branding does have some benefits, especially in airports and other specialized locations, the "something for everyone" model has not proved its worth. Yum found that adding A&W and Long John Silver's to other concepts did not add to unit revenue--co-branding those concepts just created headaches and increased costs. Co-branding can increase operational complexity, which can lead to substandard products and poor customer service. More important, the concepts need to mesh on the most basic level, drawing from the same customer base and making intuitive sense: Franchises have found that skeptical consumers will pass up a baffling lobster-and-hot-wings merger for a single brand they understand--every time.

Many well-established brands have difficulty bending their strict operations rules to accommodate a partner, and they may run the risk of diluting their image if they sticker over their core concept with less-trusted brands. For example, Yum found that the limited menus at A&W and Long John Silver's were perceived as old-fashioned and boring, especially when paired with those at Taco Bell and KFC. Adding those smaller brands to an existing unit achieved little except to pull the focus from the more popular brand.

While the great co-branding experiment has more or less fizzled, the idea is not completely dead. Co-branding can be successful if it's done strategically between complementary brands, like salads and smoothies or pizza and another savory impulse snack. Many companies that have thought through their co-branding are finding the economies of scale the strategy produces are worth it.

"There are definitely some clear challenges in co-branding," says Steve Beagelman, president of SMB Franchise Advisors, who has worked with co-branded franchises over the last 25 years. "But if you can make it work, there are a lot of synergies and benefits, especially in making sure franchisees can make money. And that's ultimately what small business is about, especially in franchising. Let's say a franchisee has found a great location, but the costs are just too high. Co-branding gives you a real good opportunity to make that location work."

Let's get together, yeah yeah yeah: Vas Maniatis co-branded with Walmart to expand his chain of Seva salons.
Photography by Rudy Archuleta

Selective Salons
Vas Maniatis built his Seva salon chain almost exclusively through co-branding, though his model is a bit different than putting two food concepts together. Instead, his small salons, which focus primarily on eyebrow threading, lash extensions and nails, are found exclusively in Walmart stores. While Seva is completely independent from Walmart, the salon chain's convenience, value pricing and speed make it appealing to the mass merchant's shoppers, according to Maniatis. 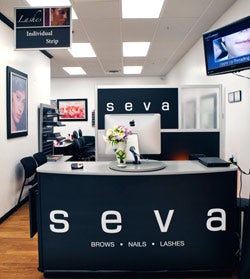 "Our customer is the Walmart customer, so co-branding to me has been huge," he says. "We're all about enhancing the one-stop shopping experience [that] Sam Walton built." Maniatis has opened 25 units in eight states since 2010 and hopes to double growth in 2012.

Seva didn't start out as a co-branded franchise. In fact, it didn't start out as "Seva" at all. For the first several years, the Chicago-based salon was called Simply Eyebrows and performed only eyebrow threading--a quick, less-painful alternative to waxing. Most threading takes place in malls at open-air kiosks; Maniatis hoped to improve the experience by offering a private session in a spa atmosphere. He was also focused on convenience and value, so a friend suggested he talk to Walmart about opening in a new development in Indianapolis.

A skeptical Walmart initially gave Maniatis the brushoff, but unbeknownst to him, a regional manager had been pushing for the concept, and when another tenant dropped out a year later, the space was offered for the salon. That first store was a hit, and in late 2009, two Walmart executives flew to Chicago to talk to Maniatis about a partnership.

"They basically said, 'Look, we love your concept,'" he recalls. But, he says, the execs thought it needed to be "bigger" and suggested adding other salon services and positioning the company as a Walmart exclusive.

Maniatis agreed, found a more appealing name and hasn't looked back. Co-branding with Walmart has not only given Seva huge traffic flow, it has freed up resources to develop other aspects of the business. "Our franchisees start with built-in traffic of 30,000 to 50,000 customers per week, with no marketing costs. That's given us an opportunity to do things that are state of the art in customer engagement," Maniatis says. "We've built an iPad-based paperless system … We have remote monitoring capabilities and can see our stores in real time and see what type of customer transactions work."

The only drawback to the co-branding relationship is that Seva can grow only as quickly as Walmart does, and the salon doesn't have a guaranteed spot in every development; it has to be chosen from a shortlist of approved tenants that include McDonald's, Subway and other elite franchises.

"It's been hard for us to open in as many spaces as we'd like," Maniatis admits. But, he adds, partnering with Walmart takes the guesswork out of site selection. "The marketing's done by Walmart. The due diligence on where to locate is done by Walmart. We just need to focus on our core, which is our service, and engaging both the active and potential customer."

Sweet Spot
Seva's partnership is a dream scenario for co-branding. Other companies have more complex relationships, though they can be just as rewarding. Ted Milburn, vice president of franchise development for Nestlé Tollhouse Café, which sells baked goods, coffee and frozen yogurt, has worked at other concepts that have co-branded--some successfully and others not. When he was approached with an opportunity to team Tollhouse with Häagen-Dazs, he thought the synergy would be perfect, evening out year-round customer flow and complementing both products. In 2011, the companies began opening co-branded locations across the country.

"We eliminate the deal-breaker … Whatever people want, we can cover it."
--Ted Milburn, Nestlé Tollhouse Café

Not only do the co-branded stores smooth out the annual sales calendar, they appeal to the public with their synergistic offerings. "We eliminate the deal-breaker," Milburn says. "We cover the gamut, from cookies to frozen coffee beverages to smoothies to ice cream creations. Whatever people want, we can cover it. It would be different if we were co-branded with a pizza concept. People come in to a pizza place for pizza; we would be just an afterthought."

Dan Ogiba, director of development for Häagen-Dazs, agrees. "We're a complete dessert cafe," he says. "We looked at this as an opportunity to grow and for our franchisees to increase their revenues. We think serving larger groups outweighs any competition between our sweet products."

Focus Brands, which owns Schlotzsky's deli, Cinnabon and Carvel Ice Cream, thinks putting sweet treats together with sandwiches is a winning concept. Schlotzsky's and Cinnabon both bake their products daily; this appeals to franchisees, whose employees already have experience running ovens, according to Schlotzsky's president Kelly Roddy. Adding a Carvel element for a tri-branded store is a little more expensive, but Roddy thinks it complements the other offerings nicely.

"One of our concerns was that selling Cinnabon products would cannibalize purchases from our core Schlotzsky's menu," he says. "We found it didn't, and that it actually brought additional customers into stores and grew revenues with no additional labor costs, no rent, no managers or any of the things that come up with a separate unit."

Already, 165 Schlotzsky's have retrofitted Cinnabon ovens into their stores; Roddy projects that by year's end, more than 200 of the brand's 350 units will be selling cinnamon rolls. In 2011, 90 percent of new-store sales were tri-branded locations; in 2012, plans are to include Cinnabon and Carvel elements in all new Schlotzsky's units. So far, the co-branded stores are drawing in more customers in the 18 to 25 demographic, and more women.

"It has really worked out to be a home run for franchisees," Roddy says. He insists the co-branding isn't about shoehorning Focus Brands concepts together willy-nilly, pointing out that significant testing and research indicated that the concepts would make a good partnership. "I haven't seen many co-branded concepts recently that work well and make sense as these do," he says.

Co-branding is not nearly as prevalent or hyped as it was a decade ago, but impressive numbers of franchises are giving it another shot. Hot dog chain Nathan's Famous is committed to growing almost exclusively through co-branding. Cold Stone Creamery has partnerships with Tim Hortons and the Rocky Mountain Chocolate Factory; Tasti D-Lite, which purchased Planet Smoothie, plans to give co-branding a test-drive.

While it's doubtful that co-branding will prove as revolutionary as the drive-thru window, it may turn out to be a profitable strategy after all. "There is definitely a part of co-branding that really makes a lot of sense," SMB's Beagelman says. "It can help a franchisor grow quicker. It can help make sure franchisees make money. And for smaller franchisors, you can learn how more successful chains do things. It's not for every brand, but if you're flexible and are willing to listen, it can work."