By Dinah Wisenberg Brin May 1, 2012
Opinions expressed by Entrepreneur contributors are their own. 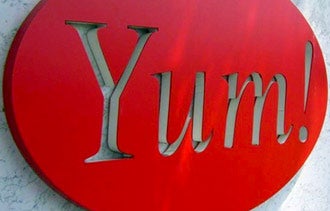 Changes are on the menu at Yum! Brands, the parent of KFC, Pizza Hut and Taco Bell.

Yum!, which operates more than 37,000 restaurants in 125 countries, announced Tuesday that CFO Rick Carucci has been promoted to president of the Louisville-based company.

The announcement follows a recent report that the world's largest restaurant operator is selling many of its U.S. stores to franchisees and channeling investments to emerging markets.

Carucci, 54, will oversee Yum!'s U.S. and international divisions and report to Chairman and CEO David Novak, who had also been president. Patrick Grismer, 50, becomes CFO.

Novak, who teaches and writes books on leadership, offered assurances that he will remain involved in overseeing the company. With Carucci's promotion, the company is in a position "to best leverage scale and capitalize on our aggressive growth opportunities in emerging markets including China, India, Russia, Africa, France and Germany," Novak said in a statement. "These opportunities simply did not exist when we started our company 15 years ago."

Meanwhile, Dow Jones Newswires reported last week that YUM plans to sell hundreds of U.S. restaurants to franchisees and use the proceeds to open new stores in countries with faster-growing economies, such as China and India.

The story cited a recent investor presentation in which Carucci said YUM tends to reduce ownership in low-growth businesses and boost investment in higher-growth ones. The company's restaurants outside the U.S. produce a majority of its profits.

Restaurants in emerging markets have expanded from less than a third of YUM's company-owned stores in 2007 to approximately 60 percent today and an estimated 70 percent by 2014, according to the Dow Jones article.

U.S. sales dipped last year and YUM has been working on a turnaround in its domestic operations, the story noted. A restaurant chain advisory firm principal told the wire service that so-called refranchising isn't uncommon for "mature" businesses, as they can achieve higher return on capital elsewhere and protection from rising domestic commodity prices and other outside risks.

More on YUM: A new QSR Magazine profile of Novak noted that none of the half-dozen "major KFC owners" who were asked to comment on the CEO's leadership responded to the quick-service restaurant industry publication.

QSR quoted Andrew Selden, attorney for the Association of Kentucky Fried Chicken Franchisees, as saying, "They're all terrified." The franchisees "don't want to get on the targeting radar."

The magazine notes a history of strife between KFC and franchisees, and says Novak wrote in his book that when he became KFC president, he inherited a business that had financial problems and was "full of animosity."

Of note, QSR quotes Novak as saying YUM is "100 percent focused on making sure we grow the U.S. brands," and that KFC remains YUM's biggest challenge.