By Dinah Wisenberg Brin May 28, 2012
Opinions expressed by Entrepreneur contributors are their own. 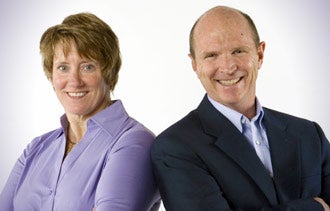 Dawn and Mark Kelly, both veterans of the U.S. Air Force, opened a TeamLogic IT franchise on May 1.

Mark Kelly spent 25 years as a fighter pilot and served in Iraq and Afghanistan before retiring from the U.S. Air Force in 2009.

After entering civilian life and earning a master's degree in engineering management, the retired colonel started looking for opportunities to run a small business and asked FranNet, a franchising consultant, to help him with ideas.

One of those ideas was computer services franchisor TeamLogic IT, which is waiving its normal $40,000 franchise fee for the first 10 qualified veterans who apply. TeamLogic is one of hundreds of franchises that responded to the International Franchise Association's "Operation Enduring Opportunity" campaign, which urges franchisors to hire and recruit 75,000 veterans and spouses and 5,000 wounded vets by 2014.

On May 1, Kelly, 51, and his Air Force veteran-wife, Dawn Kelly, 50, opened their first franchise in Colorado Springs, Colo. The couple felt the chain matched Dawn's "strong skill set" as a former Air Force computer analyst with multiple professional IT certifications, husband Mark says. The new location is also the first one that TeamLogic has awarded through its veterans program. "They were really willing to put a substantial investment of their own in us," he says.

The couple didn't disclose how much of their own money they invested in the location, but most franchisees must be prepared to pay an additional $30,000 to $90,000 in addition to the franchise fee.

The Kellys' story, as well as anecdotal evidence and statistics, suggests that the IFA's veterans program may be working. The group reported this week that veteran franchise ownership has spiked in the past year. Citing research associated with G.I. Jobs's 2012 Military Friendly Franchises, the IFA said veteran-owned franchise businesses among the 4,000 most military-friendly franchisors rose 35 percent to 11,469 in the past year.

The IFA says 468 companies are now members of its VetFran group and participating in Operation Enduring Opportunity. Companies offering discounts to veteran franchisees include Smoothie King, ServiceMaster Clean and 7-Eleven, according to data on the IFA's website.

Hundreds of thousands of veterans returning to the workforce are coming back to a very tight labor market, notes Brian Miller, president and chief operating officer of The Entrepreneur's Source, which provides career coaching and helps people find franchising opportunities. Becoming an entrepreneur is "one of the only options for them to build wealth and equity as well," he says.

The Entrepreneur Source, which is a franchisor itself, also supports Operation Enduring Opportunity and is looking to recruit veterans. Miller and others say veterans are well-suited for franchise ownership, which mixes entrepreneurship with franchisor guidelines for operating the business.

"They have that drive and passion but they're used to following a system," Miller says.

The Kellys have their own system as well for their TeamLogic IT franchise: Dawn is the lead technician and Mark performs business development activities. Within two weeks of opening their doors, the Kellys had cultivated five clients, "so in a two-week period, we're pretty happy with that," Mark Kelly says.

"We want to try to actively go out and find other veterans that we can hire on into our company," Mark Kelly says.