By Jason Daley October 19, 2012
This story appears in the September 2012 issue of Entrepreneur. Subscribe » 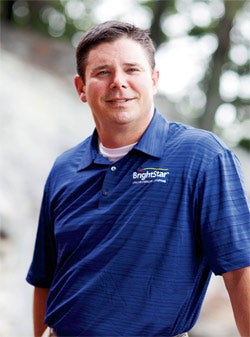 In 1991, Rick Collett was driving home from Furman University to visit his family near Chattanooga, Tenn., when his life changed forever. "It was a sunny day," recalls Collett, then a senior at the Greenville, S.C., school. "But the only other thing I remember is waking up strapped to a backboard."

He had crashed, and a good Samaritan cut him out of his seatbelt as his Jeep was in flames. Collett was evacuated to a trauma center, where he underwent multiple surgeries to repair a shattered femur, later receiving skin grafts on his feet, both of which had third-degree burns. Ultimately, he had 15 surgeries to repair the damage from the crash. When he returned home, he was aided for two weeks by a home-healthcare nurse and spent two months in a wheelchair. It was a formative experience, and it led Collett to pursue a master's in healthcare administration.

As he was finishing his degree, a chance encounter with that same nurse led to a management job at her home-healthcare business. Collett worked there for five years before moving to a hospital in Georgia. But when his family made the decision to move back to their hometown, he decided he wanted to get out of management and run his own business. Home healthcare was the obvious choice.

In January of this year, Collett opened a jumbo territory for BrightStar Care, covering 512,000 people in Tennessee's Hamilton and Bradley counties. We talked to him about his experience as both patient and provider.

What's the big difference between managing home healthcare and owning your business?
It has definitely been eye-opening, especially going through the purchase process, dealing with banks, attorneys and state licensure. In my positions before, I would set up deals, but then I'd turn them over to someone else. And here I am doing all that now. At first, I wasn't prepared for the reality of running the business day-to-day.

I have much more respect for people who are small-business owners. Living in a tri-state area, I have to be familiar with workers' comp and employment standards for all three. And I hadn't had to deal with staffing issues in 15 years. Then I started getting calls at 3 in the morning from employees saying they're sick. The first time that happened, I looked at my wife and said, "What have I done?"

What differentiates you from competing home-healthcare providers?
We let people know that the nurses we hire are ones we would let take care of me or my mom. It's a different way of thinking, because it rules some people out quickly who might be OK as caregivers. Having been a patient, I've had very compassionate caregivers and some who are not. We don't tolerate the non-compassionate ones. When you're in a weakened state you're vulnerable. We stress with employees that they are going into someone's home. They have to be aware of that and respect their client's privacy and their things.

You've been in business less than a year. Are you getting the hang of it?
We allowed three months for the learning curve, and we realized quickly that we needed extra help on the sales and marketing side, so we're recruiting for that. Once that's in place I think it will take off. Word-of-mouth has been tremendous--we had a nurse walk in recently who said she heard this was a great place to work and asked for a job. I definitely see the light at the end of the tunnel.

Would you have gone into healthcare if it weren't for the accident?
I don't think I was headed into healthcare. My relationship with the nurse who took care of me and gave me my first management job shaped where I was going. She's president and CEO of a hospital in Georgia now, and we stay in touch regularly. I don't know what I was going to do, but I wasn't thinking healthcare.

Are you fully recovered?
I was very athletic before the accident, and I had a certificate from the American College of Sports Medicine and National Strength and Conditioning Association. I'd considered being a physical therapist. But it wasn't until 2003 that I really got back to being athletic. I hadn't run in 10 years because it was so painful, but I did the St. Jude Country Music Marathon in Nashville in 2003, then started doing small triathlons. Now I've done the Chicago Marathon, a half Ironman and the full Ironman in Florida.