The Secrets Behind a Satisfied Franchise Staff

By Jason Daley March 8, 2013
This story appears in the February 2013 issue of Entrepreneur. Subscribe »

If you fell asleep in a corner booth at one of the 23 Lion's Choice roast beef restaurants in the St. Louis area for, say, a decade, you might wake up to some familiar faces. While most quick-service restaurants have annual turnover rates of 60 percent or higher, according to the People Report Workforce Index, the average tenure of the associate managers at Lion's Choice is six years. What's more, the average assistant manager has been on duty for 12 years, and the average general manager for a whopping 17. In fact, Lion's Choice has an employee who has been with the family-owned company since it launched in 1967. And a few years ago there was no turnover at all at one of the franchise's 15 company-owned restaurants. 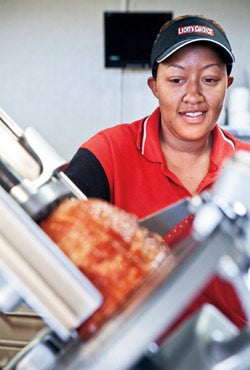 Employee retention and loyalty is the holy grail of the franchise world--indeed, it's a huge goal for almost every type of business. But keeping employees around, especially in low-skilled jobs, is difficult and can seem like a waste of money and energy. Not so, says Mel Kleiman (and just about every other management guru out there). The founder of Humetrics, a Sugar Land, Texas, consulting firm specializing in recruiting and retention, believes employee loyalty is at the core of every good company. "Employee retainment is probably more important today than it's ever been," he says. "People are doing more with less, so great employees are critical. The way you treat employees determines the way employees treat customers."

Despite the logic of that formula, when things go wrong, it's usually employees who bear the brunt of cost-cutting. In recent months several high-profile franchisors, angry about new government policies on healthcare, have announced plans to reduce wages, cut hours, cancel employee benefits and raise prices for consumers. And while many business owners can sympathize, most see that strategy as self-destructive.

"I think franchisees are often frustrated by employees, and some understand the relationship between employees and sales better than others," Boyens says. "Some think turnover is expected and churn through employees. When things go bad, one of the biggest cuts right off the bat is to reduce training and development. But that's one of the key motivators to help people grow. Or people don't get bonuses, or the share of their healthcare costs go up. That's when you have employee turnover."

Culture of Respect
At Lion's Choice, Jim Tobias, a second-generation owner, is committed to treating his employees well. Sometimes that means spending more upfront on training, hourly wages and benefits, but he is convinced he gets it all back in return. "I think a lot of larger restaurant chains are concerned with showing good numbers every quarter, and they try to squeeze as much as they can out of every employee. That's great for them in the short term, but terrible in the long run," he explains. "I've had so many employees that have played that game before coming to Lion's Choice. They love the fact that they know what they're in for here."

What they find at Lion's Choice is a culture of respect. That begins with managers, who aren't forced to work crazy overtime hours, as is common at many fast-food outlets. GMs are scheduled for 47.5 hours per week and never have to exceed that. Flexibility is the rule: If they have to leave 30 minutes early to pick kids up from school or run a personal errand, they aren't chastised. Lion's Choice also employs three swing managers who can fill in so that GMs can take vacations without worrying that their store will collapse while they're away. 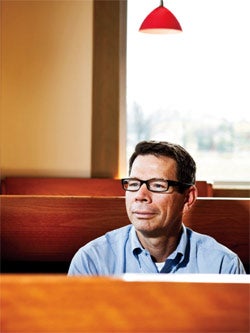 "Scheduling is the biggest thing you can do to keep employees happy," Tobias says. "You have to respect that your employees have a life outside work. We want the workday to be sustainable. We don't want them to sprint through work, telling themselves, ‘Just stick it out another month.' We want them to feel that what they're doing today is something they can handle years into the future."

Tobias believes the spirit of respect he instills in his managers trickles down to hourly employees as well. "They have more respect for the business, since we give them a truly professional manager running each shift," he says. "Since we go over and above to give them that, they give us more in return."

Tobias offers health and life insurance to full-time employees at company-owned stores. But Lion's Choice franchisees have the freedom to design their own benefits packages. "We don't require franchisees to do the same as we do, but we're in the same marketplace, and there's a lot of interaction between franchise stores and corporate," he explains. "Because of that, our franchisees know that if they offer benefits too much different from ours, they're going to lose people who will come to work for the corporate stores. We don't need to force the issue."

But he admits that if his company begins expanding outside the St. Louis area, it may not be able to offer the same perks. "When franchisees open in remote markets, it could be a whole different game plan," he says. "It could be hard for a franchisee with one store to offer medical insurance."

But fringe benefits aren't the only way to encourage loyalty and longevity. Humetrics' Kleiman says that a great boss and co-workers, interesting work and a family-friendly environment have been shown to trump extra cash for most employees. Feelings of competence and satisfaction are often a function of training--the more in-control and involved employees feel in the job, the more likely they are to stick with it.

That's something Lori Lowell, who owns eight Gold's Gym locations in Virginia and Wisconsin, likes to emphasize. Since she can't be on-site every day, it's imperative for her to have highly trained employees who are as invested in the business as she is. "We want to give our employees enough training so they can stay a long time and grow and feel valued," she says. "We can't give our members good experiences unless our employees have good experiences. We want them to wake up in the morning and want to go to work."

Hiring Power
The key to employee retention is to be very particular about recruitment, then to train new hires in operations to the highest level necessary. "We need to empower our employees. We all need to breathe the same, we all need to know how we like to operate, what our culture is all about," Lowell says. "It takes time and energy and money to do that and to make sure they perform. You have to be careful. Turnover is tragic; it's a huge waste of time and money."

Turnover is inevitable, however, if you don't start out with the right employees. Kleiman likes to cite the founder of Wal-Mart: "Sam Walton used to say the most important decision a business owner makes is who they allow through the door to take care of customers."

But identifying qualified employees who may be in it for the long haul takes more than posting a job opening online. "The biggest problem is that companies go looking for employees in the wrong place," Kleiman says. "They look in the easy pools without any big fish. They're looking for people who are looking for jobs."

Instead, he suggests taking a more proactive approach: headhunting great managers who are already employed and keeping an eye out for closures or layoffs among the competition in order to pursue the best talent. Even a small franchisee should be actively recruiting, not waiting for résumés to be slipped under the door.

"The worst person to hire is not a bad employee; it's an OK employee," Kleiman says. "Why? If you get a bad employee, you figure out pretty quickly they're bad and get rid of them. If you hire someone who is OK, then at least they're OK, and you have too many things to do besides finding someone better, so you just leave them in the job. Mediocrity is a slow death."

Sales productivity expert Boyens believes franchisees are particularly susceptible to this. "When you go back to the beginning, to when they started operating on bootstraps and scratched together all the money they could get, they usually started with friends and family working for them," he says. "It's a difficult situation to have employees based on bloodlines and not experience or skill. You can't afford to hire talent, and have a tendency to settle for what you can pay for rather than what you need."

Finding a way to create a culture of satisfied employees from the get-go may pay off faster than business owners imagine. "Research shows that repeat customers spend, on average, 67 percent more than new customers," Boyens says. "Employees driving customer satisfaction is so important. If you have happy customers, they have a tendency to buy more."

Tobias of Lion's Choice agrees. "If you treat your employees like numbers, as an expense, it's tempting to cut them when things get tough," he says. "But if you and your managers know them, know their kids, notice when an employee buys a new car and actually care about them, you see them as an asset, not an expense. If you take good care of them, they'll take good care of the customer--and you."