Franchise Takes the Cafe Concept on the Road

By Jason Daley April 10, 2013
This story appears in the March 2013 issue of Entrepreneur. Subscribe »

Mike Ash, who had worked in restaurants since he was 15 and earned a degree in hospitality management, hoped to one day open his own eatery. But as the years went on and he managed various restaurants and cafeterias, Ash, now 35, figured he was unlikely to ever save enough money to open his own place.

Then, flipping through a Costco circular in 2010, he saw an ad for the BikeCaffe, a British franchise concept that had recently come to the U.S. The idea was as simple as the name--a mobile coffee shop mounted on a four-wheel cycle, complete with Astoria espresso machine, blender, pastry bin, refrigerator and sink.

Ash signed on as one of the first U.S. franchisees and began fueling up downtown St. Petersburg, Fla. Today you can find him on the corner of Fourth Street and Central Avenue--or sometimes, especially if it's extra hot or rainy, inside the BB&T bank building. On weekends Ash sets up his mobile java machine at festivals and events.

Eventually, Ash hopes to step back from the grinder. "I would love to own multiple carts and spend my time marketing them," he says. "But until then, I still enjoy it. It's a pretty awesome job."

He filled us in on what it's like to be the go-to guy for to-go coffee in downtown St. Pete. 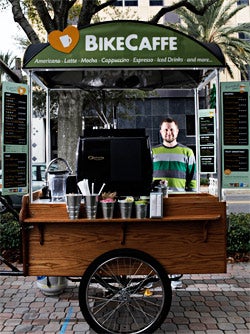 Coffee from a bike?
That can't be very good. The coffee is really, really good! It's all fair-trade organic tea and coffee, and I think we're the only place in downtown St. Pete that carries that. The biggest comment I get is, "You can't make all that stuff on your bike, can you?" Our menu is the same size as Starbucks'; we can make macchiatos, lattes, chai--everything. We also make smoothies.

All the drinks are made to order. It's a little slower than pouring drip coffee, but the quality is 10 times better.

How do you like making your own schedule?
It's kind of weird to start a business thinking you can work your own hours. But you end up working the same number of hours as before, usually more. At the same time, it's kind of cool that it's yours, and what you put into it, you get out of it. I'm always working. I get here at 6:20 a.m. to set up and leave around 4:30 p.m. I also work weekends, so at least 50 hours a week. In 16 months, I've missed only three days.

What's your biggest seller?
Lattes are always popular. People also like my seasonal drinks. I have a chalkboard and carry three or four specials per day. I usually create them myself, things like eggnog lattes, mocha peppermint hot chocolate or caramel toffee nut lattes. We have a lot of freedom to experiment.

Do you get a good workout riding the bike?
Well, the thing weighs about 400 pounds. I don't think I've ever ridden it more than half a mile at a time. It's geared super low, so if there are no hills or rough terrain, it's easy. You wouldn't win any races on it. Florida is pretty flat, so I'm lucky with that.

What's the biggest misconception about your BikeCaffe?
People assume I sell hot dogs. Every day someone comes up asking for one.