Intel Engineer Shares Her Passion With the Next Generation

By Jason Daley November 7, 2013
This story appears in the October 2013 issue of Entrepreneur. Subscribe »

When Shu-ling Garver was growing up during the Chinese Cultural Revolution, opportunity was not a word she understood. Her father, an English teacher by profession, was labeled a political enemy and forced to dig tunnels. The family lived in a Shanghai back alley. It was a terrible time, but the little girl studied hard and learned English from her father and the radio.

Garver appeared to have no chance of making it out of the slums. But when she turned 17, she was surprised to learn that she was allowed to apply for college. After completing two years at a technical school in Shanghai, she transferred to Portland State University in Oregon, where she graduated in 1989 with a degree in computer science. She was recruited by Intel and has been working for the chip manufacturer ever since.

Giving children an opportunity to succeed is a passion for Garver. That's why, in January 2012, she and her boyfriend opened the Portland branch of Engineering for Kids, a program that teaches the basics of engineering and design through such projects as computer-aided Lego construction, bridge building and video game programming. The business has come along at just the right time--in an era of budget cuts, school districts across the country are jumping at the chance to add such programs to their after-school lineups and to host engineering summer camps.

"I want to make a contribution from generation to generation," says Garver, whose franchise employs 10 teachers who run the program all over Portland. "I'm pretty much working two full-time jobs, but I don't feel this is work. I can't wait each day to see what's going on in these classrooms."

She talked to us about building the next generation of engineers. 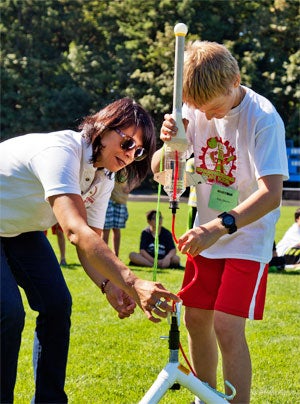 Having a blast: Engineering for Kids' Shu-ling Garver and students fire off self-made rockets.

Do kids need to be pushed into engineering?
Lots of kids are end-users of technology, but they haven't learned how to design and program technology. It's a user culture--they like Facebook and Twitter, but they aren't tech-savvy as to how those apps are made. There's a lot of awareness that has to happen to get more people interested in the engineering side of things.

You've helped Intel recruit female engineers for years. What's the status of women in the field?
At Intel in the '80s and '90s we wanted to pay attention to hiring more girls, but it turned out only a small number of engineers were women, and there just weren't enough to hire. So I worked with girls in college to get them interested in engineering. But I think it's better to start even younger, in elementary school.

Things are getting better. I go to the Women at Intel Network Conference every year, and last year I was shocked at the huge number of young, hip girls working at the company. It was very encouraging. Twenty years ago it was mainly secretaries. Now it's these very savvy, fit, well-educated women. But there's still a lot more to do.

What happens at Engineering for Kids?
We do lessons based on mechanical, civil and aerospace engineering and many other disciplines. For instance, we race Zip Sails, which are little sailboats the kids build that a fan blows down a piece of fishing line across the room. The kids use tinfoil, felt, tissue paper, all types of materials to build their designs. If it is too slow or falls off, they look at their design and fix it. We encourage them to chart their work, from design to validation--the whole engineering process. We also design bridges across the room, and parachutes and airplanes. It's not boring stuff.

Sounds like fun. Does this really steer kids toward engineering?
Quite a few express interest in being engineers. It really gets into their heads, even the girls. One time we were doing a birthday party, and this little girl came in and was very shy and didn't want to do it. We got her started, and by the end of the lesson she was leading the other kids. I'm sure that experience will have a huge impact in her head.