Why Are These High-Profile Franchises Suddenly Going Public?

By Jason Daley January 16, 2014
This story appears in the January 2014 issue of Entrepreneur. Subscribe »

Last year, investment management and capital markets firm Janney Montgomery Scott downgraded stock in McDonald's from a buy to a neutral rating. This type of move is a daily occurrence on Wall Street, but for the fast-food giant, it was another matter. McDonald's first-quarter results had shown a 1.2 percent decrease in U.S. same-store sales and a 1 percent drop globally. Bad news, especially since a 1.8 percent decline in October 2012--the company's first negative-growth month in nine years--led to the ouster of the president of McDonald's USA and rattled the burger behemoth's confidence. Missing earnings estimates and month-over-month sales goals is bad enough. But another reason the Big Mac and its stock took a shellacking was an April report by Janney analyst Mark Kalinowski, who monitors many of the big players in the restaurant industry. His proprietary McDonald's Franchisee Survey is one of the most influential documents affecting the company's stock.

Franchisees (whose survey opinions are presented anonymously) complained that the new McWraps, while popular with customers, were "an operational nightmare" and were increasing service times. They also complained that the Dollar Menu and coupons were cutting deeply into franchisee profitability.

A follow-up survey in October 2013, after third-quarter revenue had returned to normal, seemed just as gloomy. "New product introductions don't seem to interest customers anymore," one franchisee said. "Maybe we've overdone it. It seems we are wasting millions on advertising and getting nothing for it." Another lamented, "McDonald's has reached its apex." Janney and other analysts remained neutral on the stock. 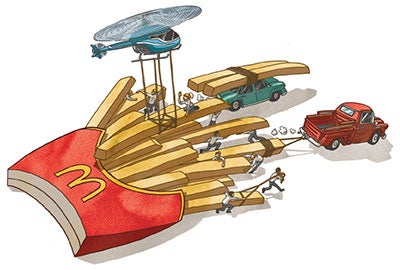 That's pretty strong criticism, especially coming from insiders. But McDonald's, which has been a public company for decades, probably can weather it. However, for other franchises, the thought of public ownership--with shareholders, analysts and a ravenous financial media probing for soft spots, and franchisees growling when their profits are balanced on the back of quarterly earnings--is a daunting proposition. Good thing most of them will never have to deal with it: By some estimates, only about 1 percent of franchise systems ever go public--mainly because the business model, in which franchisees front most of the cash needed for growth, alleviates the need for a mass cash infusion brought about by an IPO.

Still, there are situations in which franchise companies do come to Wall Street, or Wall Street comes to them. In fact, in the last year, investors have developed a taste for steady restaurant brands, luring a few high-profile franchises into the public sphere.

Jeff Rosenfeld, co-founder and managing partner of Minneapolis-based Kessev Finance, which helps franchisees and franchisors raise capital for expansion, has doubts. "You're not going to find a whole lot of reasons for a franchise to have an IPO," he says. "The question for a franchise to ask is: Why go public? It costs a lot, and costs a lot to remain public. And if they raise all that capital, they have to ask what they're going to do with all that money."

In fact, Rosenfeld says, Wall Street will barely look at a company unless it's trying to raise $100 million or more. The regulatory hurdles and red tape associated with public listing, he adds, cost about $1 million per year, meaning a franchise system has to be pretty big even before an IPO. Yet there are legitimate reasons for a franchise to go public.

Market Value
Typically, Rosenfeld says, the primary motivation for selling shares to the public is to pay down debt, though some companies do so in order to buy back stores from franchisees, to acquire a second brand to add to their portfolio or to realize profit for founders, executives and investment firms who can sell off their shares in the business.

The past year has been a big one for franchises. One of the largest and most successful IPOs of 2013 came in June with Noodles & Company. Shares in the Broomfield, Colo.-based fast-casual chain--which has 310 company-owned units and 58 franchised stores, mainly in the Midwest--opened at $18. By the end of the first day of trading, the price had more than doubled to $36.75.

At press time (toward the end of November), the stock was trading at $42.

The IPO raised some $97 million. For Noodles & Company, which has a large corporate-owned component, going public made sense, because it gave the company capital to help with its expansion to the coasts. The success of the IPO, which many say took Wall Street by surprise, inspired other brands to try their luck.

"With a strong year in restaurant stocks and the highly successful late-June IPO of Noodles & Company," wrote Sharon Zackfia, an analyst with Chicago investment-banking and asset-management firm William Blair & Company, "we suspect that IPO activity in the restaurant space could ramp up in the coming months as investor demand for high-quality growth stocks appears robust."

Indeed, Potbelly Sandwich Shop, a Chicago-based franchise with 295 locations and a cult-like following, went public in October; its stock also doubled in its first day, raising $105 million. According to the prospectus, that cash is being used to pay a dividend to the company's previous investors and to help Potbelly--which, like Noodles, has both company-owned and franchise stores--expand.

RE/MAX, the 41-year-old real-estate franchise, also went public in October. It plans to use some of the $220 million raised to acquire franchises in the Southwest and mid-Atlantic regions.Focus Brands--an Atlanta-based franchise group that comprises Auntie Anne's, Cinnabon, Carvel, Schlotzsky's and Moe's Southwest Grill--has been in talks with investment banks about going public; analysts believe this could be an exit strategy for Roark Capital Group, the private equity firm that created the company in 2004. Papa Murphy's, the popular take 'n' bake pizza franchise, is also rumored to be looking at an IPO.

Hilton Worldwide, which was purchased by investment firm Blackstone in 2007, was on track at press time for a late-2013 IPO; analysts estimate it could raise up to $2 billion.

Stock Stories
Dunkin' Brands knows what it's like to go through the excitement of a public offering. The parent company of Dunkin' Donuts and Baskin-Robbins went public in July 2011, raising $422.75 million, most of which was earmarked to pay down debt.

But Paul Carbone, chief financial officer at Dunkin' Brands, contends that Wall Street was interested in more than the company's financials. "Yes, we used the money to pay down our debt, but really the IPO was about our really strong story," he says, pointing out that investors saw major potential in the company's push into the Midwest and West and its success over the past few years in the premium coffee category. "We are one of the few pure franchising plays in the market. Almost 100 percent of our business is in franchises, and we are very asset-light. I think Wall Street understands that, and what that means for our cash flow." 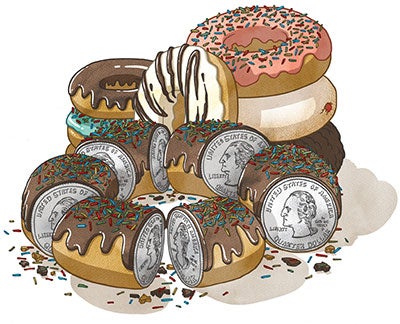 Carbone points out that along with the IPO came public scrutiny--which, he says, shouldn't be a problem for a well-managed company. "I think we have 20 analysts following us and numerous investors. I think they're all talking to our franchisees and doing their due diligence. In fact, one thing unique about us: We have a list of all our franchisee names and phone numbers in our Franchise Disclosure Document. We couldn't make it easier unless we dialed the phone for them," he says. "Our franchisees are talking to these guys all the time."

Despite the excitement around 2013's successful offerings, Rosenfeld warns not to expect franchise stocks to stay Wall Street darlings for long.

"Franchising just doesn't have the excitement of other industries. Right now social networking is exciting," he says. (Witness November's Twitter IPO, which burned all other news off the front page.) "The ultimate buyer of stocks is the retail buyer, who doesn't do a lot of research. They want something that sounds exciting. At the same time, franchise companies have some of the best returns in the market. McDonald's has done phenomenal for years. IHOP is going gangbusters. But investors want stories. And the better the story a franchise can tell the public, the better they'll do."

A Brief History of Franchise IPOs

2009
Hyatt Hotels
In the midst of the worst climate for hotels in living memory, Hyatt raised $950 million, used in part to acquire and invest in new properties.

2011
GNC
The vitamin and bodybuilding-supplement shop's public offering raised $360 million. The company turned out to be a great buy and was the top-performing IPO of 2011, gaining almost 83 percent in its first year on the market.

2011
Dunkin' Brands
The parent company of Dunkin' Donuts and Baskin-Robbins raised $422.75 million in its IPO, part of a strategy to pay down debt and toforge ahead on its quest to open 15,000 stores.

2011
Arcos Dorados
McDonald's has been a stock-market fixture for decades. But its largest Latin American franchisee, Woods Staton, who operates or franchises more than 1,970 units in 20 countries and territories, decided to play the market, too, placing his company Arcos Dorados on the New York Stock Exchange to the tune of more than $1.2 billion.

2012
Burger King
Technically, it wasn't an IPO (and non-technically, it's way too complicated to explain), but Burger King went public, reverse-merging with a special-purpose acquisition company on the NYSE.

2013
Noodles & Company
The sleeper hit of the summer, Noodles surprised Wall Street by raising $96.4 million and more than doubling its share price on its first day of trading.

2013
Potbelly Sandwich Shop
Another surprise, Chicago-based Potbelly raked in $105 million and doubled its share price on its opening day in October. Third-quarter 2013 saw a revenue increase of 11.7 percent.

2013
Re/Max
The RE/MAX IPO in early October raised $220 million, which will fund expansion into new areas of the U.S. Shares rose 20 percent on the first day, indicating that Wall Street is bullish about the housing recovery.