Franchise Players: A Father-Son Duo on Speeding Up Growth Through Franchising

Franchise Players is Entrepreneur’s Q&A interview column that puts the spotlight on franchisees. If you're a franchisee with advice and tips to share, email ktaylor@entrepreneur.com.

Two years ago, the father-son duo of William and Bart Caldwell were a retired air traffic controller and a welder, investigating opening a business. By the end of 2013, the pair had been named the 360 Painting new franchisee of the year. And, in just the first three months of this year, they had already achieved 50 percent of the sales they earned all of last year. Here's how franchising allowed them to grow so quickly. 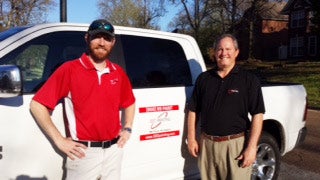 How long have you owned a franchise?  One year, four months

I had been an Air Traffic Controller for 25 years (retired). My son had been working in the trades. I had worked in the trades when I was young. Franchising has a good success rating, my son and I wanted to start a business together and a franchise seemed like the most cost effective way to begin. It reduced the learning curve in a business that, though familiar with, we didn’t feel as though we could have a running start and begin a revenue stream.

Related: Franchise Players: Veteran and Mother of Five on Refusing to Settle

I was an Air Traffic Supervisor for 25 years (retired). My son was a welder.

I made some research through search agencies, sent in a letter of interest to several painting franchises, met with several franchisees and made a determination based on monthly franchise expenses, franchise support, territories available and ultimately the CEO of 360 Painting. It was about a six month process. I didn’t want my first decision to be my worst mistake.

For the decision making process I spoke with several franchisees and franchisors of those companies, looked at franchise reviews, which were very informative, and found something that matched best for me and my son.

Related: Franchise Players: How We Knew Which Franchise Was Best for Us

Managing the business, maintaining the books, controlling marketing expenses and improving efficiency in the office.

Spend time researching different franchises. Find something that fits your personality.  It doesn’t have to be something you always wanted to do.

On the management side, if there is more than one partner, determine what each of your strengths are and divide workload to what fits each best and don’t overlap. It only causes confusion and loss of efficiency. If you want to start a business, I recommend you consider an area or business in which you can see a need or already have a large potential customer base. The business does not need to be glamorous, only one that has a broad customer base.

Last year (2013), we were fortunate to receive 360 Painting new franchise of the year. This year, after month three, we have already sold 50 percent of what we sold all of last year. The service industry is a very fast growing industry. People need and will pay for quality and service. The trades have not always given them that and customers will tell others when they get it. Our industry lives and dies by referrals.  With two partners and defined responsibilities, we feel that within the next five years we can develop and manage a business with sales in excess of $700,000. I am convinced that without a franchisor's help, with the knowledge of the business they offer, it would take at least twice that time frame and without franchising we may not have done it at all.

Related: Franchise Players: A Former Drill Sergeant Who Hopes to Help Other Vets Through Franchising

Kate Taylor is a reporter at Business Insider. She was previously a reporter at Entrepreneur. Get in touch with tips and feedback on Twitter at @Kate_H_Taylor.

4 Reasons Why Validation is Important to Your Franchise System