The Fastest-Growing Sectors in the Franchise Industry

The companies on Entrepreneur's Franchise 500 list are showing big gains. These are the sectors that are taking the lead.

By Tracy Stapp Herold December 17, 2014
This story appears in the January 2015 issue of Entrepreneur. Subscribe »

While U.S. growth remains robust, franchising has definitely become a global affair, as illustrated by Entrepreneur’s 36th annual Franchise 500®. The companies that made the ranking this year added 16,229 new franchise units between 2013 and 2014, and 55 percent of those were outside the U.S. Here’s a look at the franchising sectors at the forefront of that growth, both domestically and abroad. 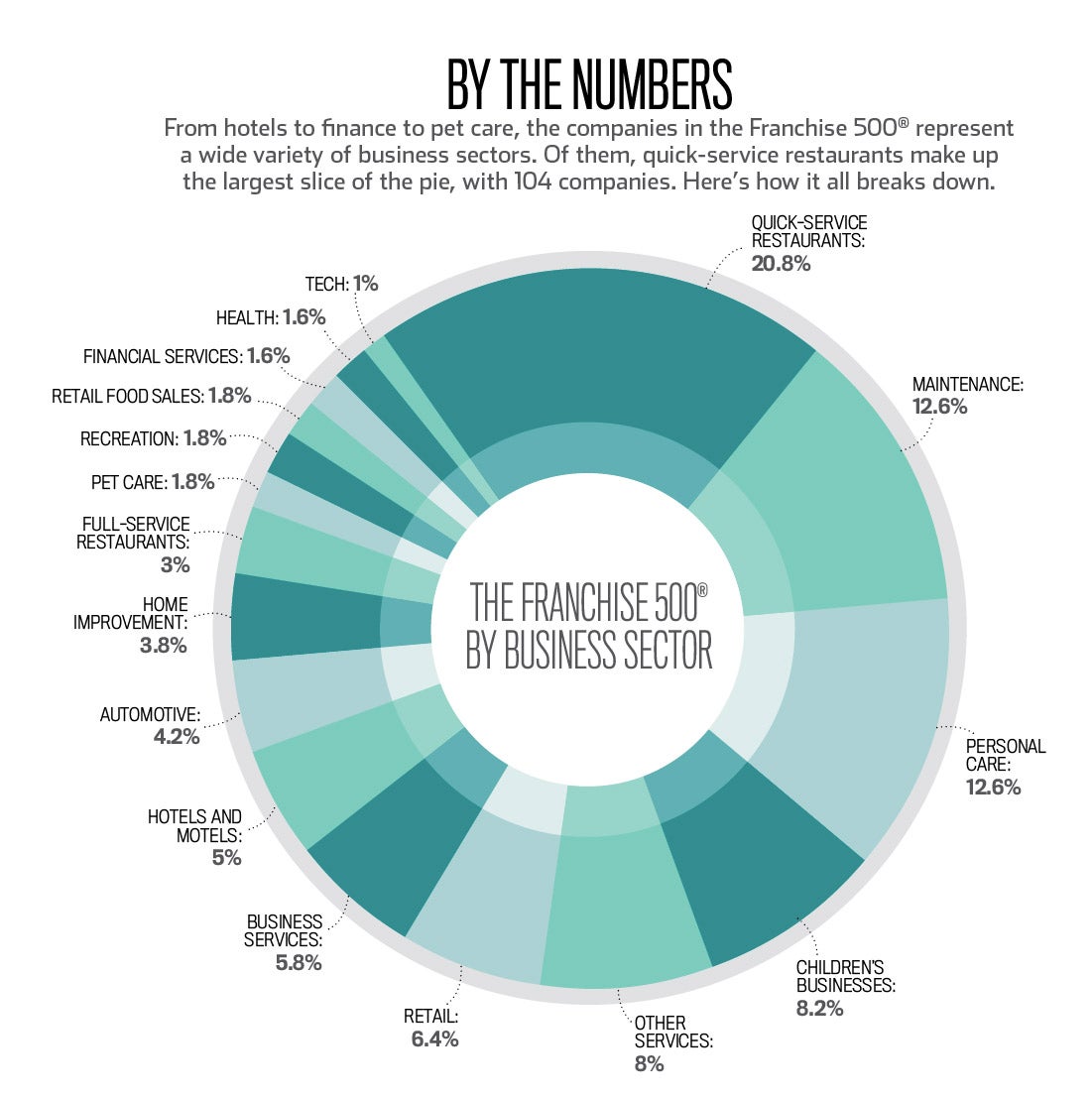 The biggest sector by far, quick-service restaurants comprise more than 20 percent of the Franchise 500®. But a shift is occurring within the industry. While fast-food companies still dominate the rankings, the overwhelming majority of new franchisors fall firmly into the fast-casual camp. Companies that have been franchising for decades have high speed and low prices locked up, so newcomers are looking to compete on food quality and atmosphere instead. Particularly popular among emerging franchisors is the “build your own” model, made trendy by Chipotle, in which customers can personalize everything from pizza to sushi.

Perhaps the biggest indicator of fast casual’s rising power is the response of the old guard. Rather than ignoring the newcomers, fast-food franchisors appear to be taking notes: remodeling stores for a more upscale appearance, revamping menus with more premium choices and even testing out fast-casual spinoffs of their proven concepts. Amid a growing backlash against fast food and its reputation for being unhealthful—plus demands for fresher, more sophisticated options—this trend may be key to quick service keeping its place as franchising’s strongest segment.

With their super-low startup costs, commercial cleaning franchises have long been among the most popular choices for aspiring business owners on a budget. But their growth has slowed in recent years as high-profile lawsuits have brought to light franchisees’ complaints about some of the industry’s practices.

Prospective franchisees may be turning instead to categories with higher costs but cleaner reputations, like residential cleaning and restoration services. Also increasingly popular are environmentally friendly solutions to maintenance problems that might ordinarily require chemicals, like interior and exterior cleaning, pest control and odor elimination.

The competition in this sector is fierce. That’s especially true for the fitness and senior-care industries, which saw 21 and 23 companies, respectively, rank on this year’s Franchise 500®.

Where big-box gyms were once the norm, fitness studios with smaller footprints and specialized workouts are succeeding by creating a more personal experience for clients and keeping costs down for franchisees. More than one-third of the ranked fitness franchises can be started for less than $100,000.

While the highest-ranked companies in senior care have been around for 15 years or longer, new concepts are
continually joining the fray. And as they seek to differentiate themselves, they’re introducing products and services—such as home-accessibility equipment, assisted-living placement and patient advocacy—that could strengthen the
sector as a whole.

Still relatively new to franchising, massage is proving to be a bright spot. All six massage franchises on this year’s list improved on their 2014 rankings—a testament to franchising’s power to transform an industry. It’s no wonder other personal-care businesses, like waxing and nail salons, are embracing the franchise model.

Kids are big business, thanks to parents who are willing to invest in them. From companies that offer preschoolers a head start to tutoring services that help high-schoolers boost SAT scores, franchises are earning high marks by supplementing the traditional education system.

A hot topic in education right now is STEM (science, technology, engineering and mathematics). U.S. students are falling behind (ranking 25th in math and 17th in science among industrialized nations, according to the Department of Education), and many parents want to reverse that trend. This would explain the impressive growth of the tutoring franchise Mathnasium, which cracked our top 100 for the first time this year. Also increasingly popular are businesses that aim to make STEM subjects fun, like Bricks 4 Kidz, the Lego engineering franchise that tops our enrichment category for the second year in a row, despite being one of the youngest companies in the category.

Tracy Stapp Herold is the special projects editor at Entrepreneur magazine. She works on franchise and business opportunity stories and listings, including the annual Franchise 500.