Will These Franchises From Down Under Come Out on Top in America?

Take a walk down the street in Sydney or Brisbane, Australia, the world’s most franchise-crazy nation, and you might see a few familiar American brands like Subway and McDonald’s. But citizens of Oz are more likely to opt for a popular, homegrown brand like Donut King, Muffin Break, Bakers Delight, Mad Mex or Dymocks bookstore. Down Under, Wendys isn’t Dave Thomas’ hamburger kingdom; it’s a South Australia-born ice cream franchise.

Concepts that might have a hard time taking off in the U.S., like Melbourne-based Roll’d, which sells Vietnamese street food, and Schnitz, a Polish-owned purveyor of pan-cooked schnitzel, are franchise hits, while popular U.S. franchises like Taco Bell have turned tail and pulled out after failing to catch on.

But although many of the names may be unfamiliar, there’s plenty about franchising Down Under that Americans can relate to: the attitude, branding and overall feel of the industry. That’s because for decades Australia has looked to the U.S. for franchising inspiration. And now, as the Aussie franchise culture matures, many brands are poised to enter the U.S. market.

Franchising has been booming in Oz over the past two decades. The Franchise Council of Australia estimates that the country has more franchise systems per capita than any other, with 1,160 franchise brands—86 percent of which are Australia-based—serving a population of 23 million. Some 79,000 franchise units employ more than 460,000 people, bringing 144 billion Australian dollars ($113 billion U.S.) to the economy in 2014.

Dave Hundt, co-founder of Sydney-based EnVie Fitness and former CEO of Contours, a women’s fitness franchise he grew to more than 200 units in Australia, says he believes the country’s unique geography has led to its fondness for franchising. “One thing that is interesting about us is that 80 percent of our population lives within five cities: Sydney, Melbourne, Brisbane, Adelaide and Perth. We have very dense population centers, and not a lot of people outside that,” he explains. 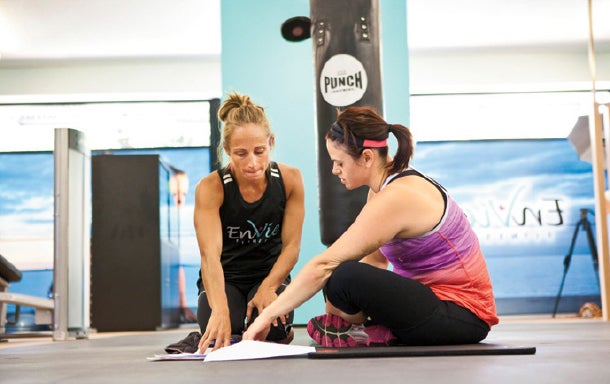 That dynamic creates intense competition among businesses in a handful of population centers. “There is increased pressure in making a small business work in our cities,” Hundt says. “Franchising is a way of getting a competitive advantage, so I think that’s why it’s become so popular. Having a recognizable brand makes a huge difference in those five markets.”

But that rapid expansion hasn’t been without its bumps and bruises. The rise of franchising in Australia has also led to some trouble, with many fly-by-night and poorly run systems giving the industry a black eye. Over the past decade, the Australian government has tightened its franchising regulations and will likely roll out even stricter rules in the coming year.

Gillian Harper, president of Gutter-Vac, which launched in 1995, says she has seen the franchise model develop over time in Australia, but there are still kinks to work out. “Australians as a culture have a little bit of an independent streak. That comes from our roots in the Commonwealth and as a penal colony. We’re not great at doing what we’re told,” she explains. “Our franchises aren’t as structured as in the U.S. Our franchisees still like to put their spin on things. I think it’s evolving more toward the American model, and that benefits the system as a whole. But franchising still has a long way to go.”

In fact, the relationship between U.S. and Australian franchising is strong. According to Troy Hazard, a longtime franchise consultant at his company The Edge Corporate Strategies, Australia’s franchise culture has its roots squarely in the U.S.

“We are an island, and to learn and get ahead and be a leader, you’ve got to get off the island,” he says. “Australians are forced to travel. I remember coming to the U.S. four or five times a year a couple decades ago. You’d see ads for these chains in your hotel room, and it really sparked my interest. Other business leaders saw this, too, and we started reading about and developing franchises similar to the U.S. model.” 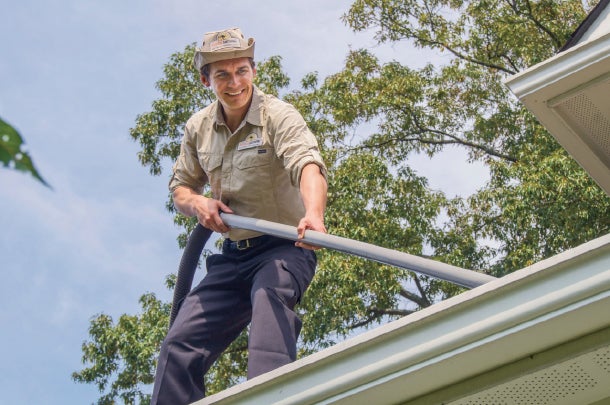 And now that some mature Australian brands are reaching their growth limits in their home territory, they’re looking toward the next logical market: the States. “As a country, Australia is always looking outward,” notes Harper, who is now based in Atlanta. “A huge percentage of our TV shows and brands are imported from the U.S., and we’ve had this big, long trade relationship. Coming here feels like an extension of our culture.”

Even though Australia is culturally similar to the States, it takes some translation for a foreign business concept to work in the U.S. That’s why EnVie Fitness, which has nine units in Australia, tapped the expertise of Gary Findley, former COO of Snap Fitness and president and COO of Curves when it was at its 8,000-unit heyday. After opening locations last year in Texas and Arizona, Findley is overhauling the EnVie model to better fit the current American market.

“The Curves model was great in the 1990s and 2000s. It reached out to women who had never worked out, and it only had one set of equipment,” he explains. “It really became a social place. Most of today’s women have worked out before and they need more, so we offer strength training, cardio, group exercise, personal training and nutrition all in one.”

A year into testing the EnVie concept in the U.S., Findley determined that most of his clients are interested in attending group classes. In response, the company is rolling out zone training, Zumba, yoga and kickboxing options.

That’s exactly the type of insight CEO Hundt was looking for when he brought an American COO onboard. “I think the smartest thing we’ve done is hire experts in the American fitness industry,” Hundt says. “It’s been an incredible experience working with people who have done this before and rolled out a franchise in the women’s fitness space.”

Hazard has consulted for companies in both countries, trying to help American brands adapt to Australia, and vice versa. “Unfortunately, over the last 20 years, there have been a lot of false starts, particularly with Australian franchise brands trying to come to the U.S.,” he says. “On many occasions I’ve had to say, ‘Stay home, you’re not ready for this.’”

But, he adds, that goes both ways. “I’ve seen plenty of American brands have to pack their bags and go home. Sometimes because they’ve been successful for 20 years in the States, they think Australians will love their model.”

Hazard says even the most experienced brands may not appreciate the cultural differences that will affect their business below the equator. For example, Subway insisted on calling its sandwiches “subs” Down Under. “In Australia, subs are underwater ships,” he says. “They don’t have anything to do with sandwiches.”

But one brand that Hazard has complete faith in is Poolwerx, a pool cleaning and supply company founded by Brisbane-area entrepreneur John O’Brien 18 years ago. The brand slowly consolidated the fragmented pool cleaning industry in Australia, and now has 240 franchises serving 307 territories as well as 84 retail outlets. 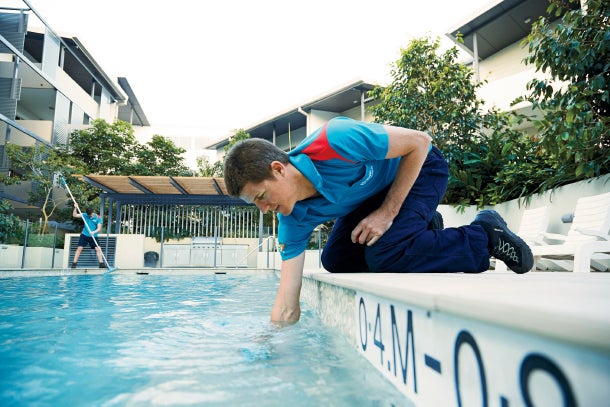 Several years ago Hazard, who had consulted with O’Brien previously, joined forces with Poolwerx, taking a seat on the board of directors, and moved to the States to study the pool cleaning sector. What he found was a huge opportunity. “The U.S. pool industry is a disorganized market. It’s where Australia was 10 to 15 years ago,” he says. “Generally, the market in America is a single guy with a pole and a truck. It’s not time-efficient or reliable.”

Hazard says Poolwerx brings pool cleaning into the 21st century, using primarily automated cleaning tools that are serviced once a month by a Poolwerx technician. The goal is to professionalize the industry and raise standards. “We have to educate the market,” he says, “but in the end the goal is to make sure the job is done better and results in a healthier pool.”

Warren Ballantyne (Gillian Harper’s father) entered the franchise market some 20 years ago when he developed Gutter-Vac. Employing his ThunderVac technology to clean all manner of debris from gutters (including Australia’s notorious venomous spiders), the system has grown to 68 units that serve homeowners as well as school campuses, apartment complexes and businesses.

When Gutter-Vac reached 50 units, it was roughly halfway to saturating the Australian market. So Harper moved to the U.S. five years ago to research the market here and look for a master licensee to help franchise the concept. She set up a test unit on Long Island, N.Y., to make sure the vac system would work in the U.S., and the results were encouraging.

At the same time, Allan Young, co-founder and CEO of ShelfGenie, a franchise with 164 units, was seeking a second brand to add to its portfolio. When he heard about Gutter-Vac, he believed it was a great fit and could take advantage of ShelfGenie’s CRM system and call center.

Harper saw the same potential, and moved to ShelfGenie’s headquarters in Atlanta and established a corporate location. After a year of testing on Long Island and another two years of testing in Atlanta, Gutter-Vac will begin franchising in the U.S. this summer, but with one big change.

“We changed the name to Outback GutterVac,” Young says. “The Australians don’t really get our fascination with them at all, but the name tells the story of where we came from, and our franchisees and employees really love it.”

Indeed, Americans’ fascination with the land Down Under and its people seems to be at least one reason such concepts are beginning to resonate stateside. “I would say Australia is more similar to the U.S. than even Canada is,” Young says. “We’re both driven, exciting people with a fun culture.”