A 'Smooth,' Not to Mention, Sweet, Choice for a Franchise

In 2012 Quamisha Nelson was a newlywed, in love with her new husband, certainly, but also "deeply in love" -- as she puts it -- with Smoothie King, the healthy fruit-drink company. So, of course it was the perfect franchise choice. "I just followed my heart," Nelson says. And, while she says she's encountered some bumps along the way -- the construction phase was longer than expected -- Nelson aims, eventually, to own 20 Smoothie Kings. Now, that's a lot of "Hulk Strawberry" concoctions. 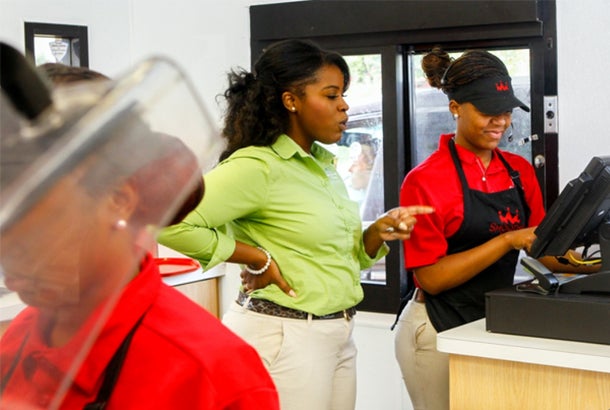 I purchased my first Smoothie King franchise in November of 2012. I have been with Smoothie King for just over two-and-a-half years and I have enjoyed every single moment of this journey.

Related: From Food Truck to Franchise: How These Cousins Turned Their Love of Lobster Into a Business

Startups are challenging, time consuming and very risky. I chose to franchise because it’s less stressful. Why re-invent the wheel when you can buy into a profitable system and be very successful?

I chose Smoothie King because I love smoothies! How awesome is it to be able to sell a product that you love and that you are passionate about!

I didn’t really seek advice from anyone. I could have, but I didn’t want to, simply because of my passion for the brand. I’m so deeply in love with Smoothie King that I really didn’t want anyone’s opinions. I just followed my heart.

Related: Can Fast Food Be Healthy? One Franchise Is Proving the Point and Profiting.

The biggest obstacle I faced during the opening of my first store was construction. The construction of this location cost more than expected and took longer than I could have ever imagined.

If you believe in the product, you can grow with the company, and if you can afford it, you should go afford it. You can’t lose if you’re investing in your dreams.

I recently decided that I want to have 20 Smoothie King locations. I’m not sure how it is all going to work out yet, but I am looking forward to the journey.

Related: What to Expect as a Pizza Chain's First Franchisee in a New State