Todd Fisher was in the commercial printing business when he decided he wanted to become a business owner. So he looked around and settled on FastSigns, a Texas-based franchised retail chain that provides custom signs, banners, displays and other graphics for businesses and individuals. A print shop of his own would not be a smart choice, Fisher concluded, due to the rapidly evolving technology changes in the commercial printing world. What did he do instead? He followed the signs, of course, to a franchising future. 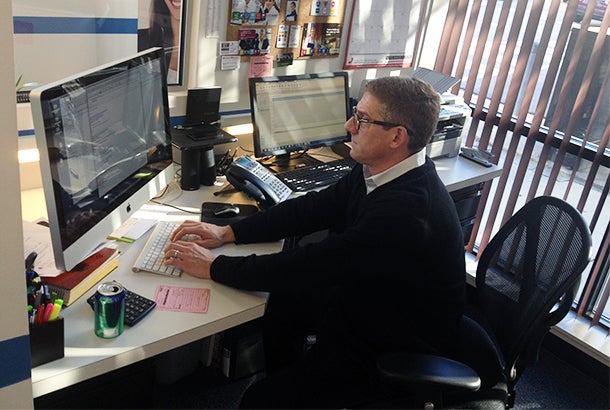 Three years as of this past May.

Related: Your Franchisor Needs to Give You the Tools to Succeed

In 2010, after being in the commercial print industry for many years, I decided that I wanted to be a business owner, myself. I first looked toward what I was comfortable with, potentially opening my own print shop. But I quickly decided against that idea because small-format printing is no longer a growth industry and is being displaced by other technologies. At that point, franchising became attractive to me. I didn’t have a desire to start something from scratch, so I looked to follow a proven system, and franchising seemed to be the best route.

Prior to buying my FastSigns franchise, I was working in the commercial print industry. I felt that a change in scenery was needed, so that’s when I decided to look into other opportunities.

I chose FastSigns since signs and visual graphics are part of the printing industry, which I knew well. Visual communications is a constantly evolving and growing industry, and FastSigns is a leader. After researching the franchise opportunity further, it was a relatively easy decision to go with FastSigns as the next step in my professional career. All the myriad solutions we provide here at FastSigns are in demand and will continue to thrive in our growing economy.

The initial investment for a FastSigns franchise ranges from $164,753 to $299,874, which includes a franchise fee; capital toward furniture, fixtures and equipment; money for construction/store build-out; funds for advertising; professional fees;and travel. FastSigns expects its potential franchisees to have minimum liquid capital of $80,000 and a minimum net worth of $250,000, along with a good credit rating.

Before purchasing my franchise, I visited numerous other FastSigns franchise locations to get a feel for the company, business operations and the services the concept offers. Also, the training was extensive. As a franchisee, I felt like I was strongly supported from the very beginning. FastSigns requires franchisees to complete a number of educational/training classes with the "University of FastSigns."

Shortly before the opening of my franchise, I went to the company headquarters in Carrollton, Texas, for two weeks of training. This included working with the point-of-sales system and the wide-format printers and equipment used to create signage. After I opened my center, FastSigns provided me with a business consultant, who stayed at my location for the first week of operation to help with any initial bumps and bruises that might come from being a new franchisee. He still continues to be only a phone call away.

Related: I Became a Franchisee So I Could Be My Own Boss

There’s a lot that goes into opening a brick-and-mortar business, and the lease and build-out of my FastSigns center was detailed. FastSigns International Inc. helped tremendously with this process -- from floor plans to the exact procedures needed to successfully and legally open my business.

Know that you will wear many hats as a small business owner. What you put into your business, in terms of dedication and passion, is what you will get out of it.

Onwards and upwards to the top quartile of the FastSigns franchise network! That's where I want to be.

Related: A Franchisee Who's Literally Building His Dream Business From the Ground Up