Opening a beef jerky franchise may seem like a bit of a random entrepreneurial vision. However, for Steven and Dana Crane, becoming Beef Jerky Outlet franchisees was the perfect business proposition. The duo had never before contemplated entrepreneurship. However, after getting to know the concept and becoming franchisees in 2013, they now say they can't imagine another career path. Here's what they have learned. 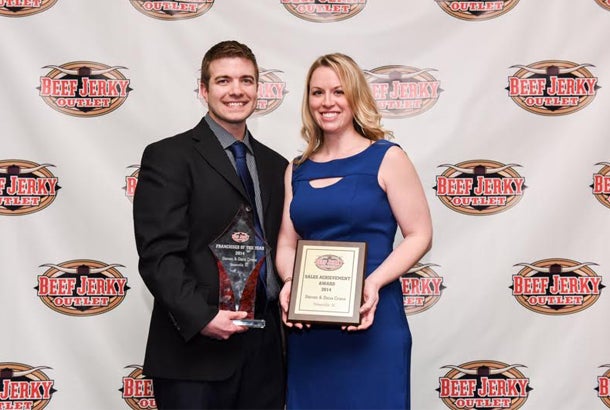 We opened our first store in December 2013.

Franchises offer a proven system that can be successful if all of the steps are followed. It’s an easier way to enter the world of business ownership than starting from scratch. In my opinion, Beef Jerky Outlet has one of the best models for all of their franchisees to succeed.

Before I became a Beef Jerky Outlet franchise owner, I had been working for various advertising and technology firms in both account management and sales. Working mainly with website design, social media and business application software systems. Dana is an occupational therapist and continues to practice OT as well as help with the business when needed.

We first stumbled across a Beef Jerky Outlet while on vacation in Pigeon Forge, Tenn. We take an annual trip there and first experienced a Beef Jerky Outlet in 2009. We were hooked on the products and concept and spent several years ordering product for ourselves as well as gifts for other people. Finally, we found out that they had begun selling franchise opportunities and it was really the first time we had ever seriously considered entrepreneurship.

We didn’t know much about franchising, but soon began to research the industry, specifically the Beef Jerky Outlet model. Things began to take place and we just kept moving to the next steps with the more information we gathered. The leadership made us feel very welcome from the beginning, and choosing Beef Jerky Outlet was really a no brainer. The COO and president Paul Lyons and Scott Parker really make you feel like family from day one. The company recently held its first annual corporate conference where all the franchisees met to talk on how to better our business. They even had an awards dinner, honoring franchisees with the most sales and gave out the first franchisee of the year award which we were so honored to win. When you are treated that well from the top down, you want nothing more than to succeed.

The initial cost for opening our first store was around $145,000. Included in this was $30,000 for the initial franchise fee, $50,000 in initial inventory, and the rest for equipment, furnishings, build out, signage, lease deposit, and other miscellaneous supplies or utilities.

My network connections that I had made over the years were extremely useful. I was referred to the Clemson University Small Business Development Council where I met Scott Whelchel. He was able to help me understand the business aspects, financing obstacles, and also helped me create a solid business plan based on the business model as well as financial projections. For more specific questions about the business itself I spoke with other franchisees and also the corporate team on many occasions. They were extremely helpful in answering questions and addressing any concerns I had. I also reached out to other franchisees with other companies to get their experience with running a franchise.

Financing was a challenge for us initially. Having only graduated college from Clemson in 2007, I had not been working professionally as long as other franchisees. Our collateral and savings was limited so we had to find a way to get over that hurdle, which we were able to do with the help of a guarantor. Another challenge with any endeavor like this is the family-work balance. We prepared ourselves for the upcoming sacrifice of time the best we could, but you never really know until you get going with it. We have a three-year-old daughter as well so it can be challenging being away sometimes, however it has gotten much better over time.

The main thing I tell people is to be prepared to follow the direction of the franchisor. They have already faced many of the initial challenges and made the mistakes before you have gotten into it. If the franchise is successful and looks like something you can be passionate about, just follow the process and it will continue to be successful for you. No need to reinvent the wheel.

Also, don’t be afraid to step out of your comfort zone. After I stepped out of the corporate world, I realized that it would be really difficult for me to go back. Opening this franchise has given me a freedom that it would have taken years to get in a traditional job setting. The only regret I have is not doing it sooner. Don’t worry about things that are out of your control. Many people came to me with concerns of the timing of the economy, the government, unemployment rates, and many other concerns. There are a thousand reasons not to do something. However, if you are passionate and have a solid plan then you can really build something great.

Currently we are in an expansion phase for this franchise. We have secured two more franchise territories that we will work on opening this year. After we get a bit further with those, we hope to add more Beef Jerky Outlet stores in other promising areas. Building a solid foundation is our first priority and then we will adapt and grow with the market to continue to offer a top quality product and service to our customer base.

Related: A Franchisee Who's Doggone Glad She Found a Business She Could 'Wuv'