This Franchisee Investigated a Restaurant Company He Liked and Signed On

Paul Scholtes has been a practicing private investigator and court-certified process server in Florida since 1985. And he has stories to tell: dangerous situations, cases involving celebrities and well-known business leaders. So, what are he and business partner Dan Ackerman doing in the restaurant trade? The spy business has gotten too competitive and no longer very profitable, Scholtes answers. Besides, he loves Asian cuisine and was impressed by Wok Box Fresh Asian Kitchen's menu, which encompasses delicacies from ten different regions. "Wok Box isn’t just Japanese, it’s not Chinese, it’s not Thai," says Scholtes, who opened his restaurant just this week. "It’s the best of all those countries." 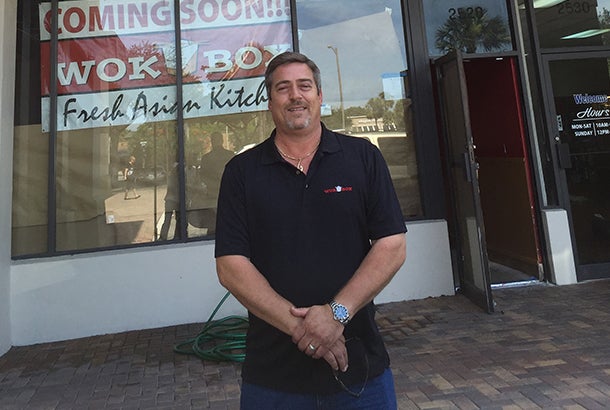 Wok Box is my first venture in franchising. My business partner Dan Ackerman and I started the process about a year ago and everything is coming to fruition. The opening of our restaurant in Coral Springs was this month.

Related: Move Over, Philly Cheese Steaks: This Franchisee Is a Booster for the Benefits of Jamba Juice

The industry has gotten so competitive that it now consists of e-filing with the courts, time-consuming emails and scanning of documents. Due to the competition, rates are constantly declining, and it has simply become too much work for too little profit. The restaurant industry was Dan’s forte prior to this venture, so when a friend of his approached him about building a restaurant together, they started researching franchises and became highly interested in Wok Box. To our great dismay, we lost this friend at a young age and while talking about him, I became interested in the franchise and asked to see the specifics. Here we are!

I have been a private investigator and certified process server in Palm Beach County, Florida since 1985.

After researching several different franchises, we went to a Wok Box presentation and had the chance to taste all of their menu offerings. We were instantly enamored with the extensive menu options influenced by the flavors of 10 Asian regions, including Thailand, Malaysia, Mongolia, Singapore, Korea, China, Japan, India, Cambodia and Vietnam.

Wok Box is totally different from anything else in the fast-casual segment, providing eager eaters with a craving for Asian-inspired meals a variety of multi-faceted flavors under one roof. Wok Box isn’t just Japanese, it’s not Chinese, it’s not Thai. It’s the best of all those countries. And then some.

The franchise gave us the layout and assisted us throughout the entire build-out process. Also, our general contractor and “store tech” was there to assist with ideas, changes and advice as to building a functional, modernized restaurant. Of course, the Internet -- Google -- was there for any additional research or questions we had if we needed additional help.

Our biggest challenge was dealing with the owners of the plaza where we leased our location. The owner sold the plaza during our build-out and we were pretty much on our own when certain issues arose. For example, after our air-conditioners were gutted by thieves for the copper, we had to spend $16,000 for two new units, replace our doors to be ADA-compliant, replace a large window that was cracked prior to our renting the space and more.

Research, research, research! Go to more than one location and speak to the managers and owners. Finding "good people" usually requires a good brand and franchise system. Also, when you're ready to build, be sure your franchise, architect and general contractor all get together and finalize your plans and add timelines and deadlines and penalties for missing them.

Be sure you have everything in your contract as to costs for everything! Remember, general contractors make a pretty penny on change orders. Budgeting is so important, and planning to stay within that budget is key.

Our next venture is to continue to open Wok Box Fresh Asian Kitchens throughout South Florida. We believe in the brand, we believe in its CEO and staff and we believe the food is fresh and delicious. There is nowhere but the stars for us.

Related: Stepping Out of My Comfort Zone as a Beef Jerky Outlet Franchisee