Born in in Vietnam 1970, Phong Huynh was an orphan adopted by a church in Minnesota, where he lived until age 13. That year, he took a Greyhound bus to California and lived on the streets in San Gabriel Valley for two years. He began working nights unofficially in an El Pollo Loco restaurant at 15, and at 16 became a cook, prep employee and cashier. Once his employers recognized his drive, however, his career took off: He was a crew leader at 17, assistant manager at 18 and a general manager at 19. He went on to top-level corporate jobs in the company, becoming its franchise training manager at 29 and director of franchise operations, outer markets, at 37. In 2009, Phong became a franchisee operating partner of an El Pollo Loco restaurant. Then, in 2012, he became a franchisee owner; today, he owns 13 El Pollo Loco restaurant and commercial properties. 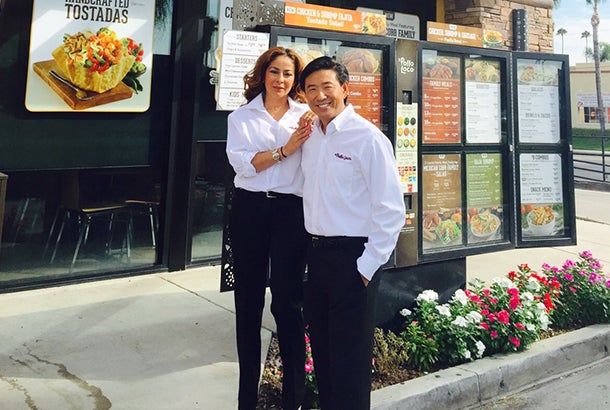 I have been an El Pollo Loco franchise owner since 2009.

Related: Long Seen as Boring, Chicken Is Becoming a Buzz Item for Restaurants

Growth, first of all: I guess you can say I practically grew up with El Pollo Loco, since I started in 1986 as a night porter, sleeping inside the restaurant. At that time, the total restaurant count was fewer than 100 units, and now it’s over 400 restaurants, which was my dream from day one! The second reason was that I witnessed an experienced franchisor with an established system who provided tremendous operational support and helped me achieve success as a rookie franchisee.

Third, the El Pollo Loco leadership team is highly motivated and has a track record of success in the restaurant industry. The team provides support and encouragement to the franchise system and works hard to help us run successful franchises.

The fourth reason why I became a franchisee of El Pollo Loco is that I truly believe in the quality of our freshly prepared entrées that could only be duplicated in a home setting. My wife and I, as well as our kids, grew up eating these guilt-free meals at least five days a week for the past 25 years. It is definitely a home meal replacement for us, and I deeply believe that El Pollo Loco is uniquely positioned to serve many more guests nationwide.

I was a determined hourly employee doing my best every day to make a life for myself and seize the opportunity that El Pollo Loco offers. I worked really hard to be the best at what I did while also attending school to further my education. The dedicated El Pollo Loco executives supported me throughout the process by providing a flexible work schedule so I could succeed. I then rose through the ranks, from assistant manager and general manager to district manager and director of franchise operations.

El Pollo Loco is a great company with a successful track record that offers quality meals that I’m proud to serve every day to my guests.  I wholeheartedly believe in the food and the company as a whole.

My transition from an operating partner to a franchisee required me to use up my savings of $750,000 to purchase my first turn-key franchised El Pollo Loco restaurant in Hemet, California, for $600,000 cash. The balance of $150,000 was put into a special business operating account to pay for initial operating costs, franchise fees, payroll expenses, etc.

The best research I did was learning about the company from the ground up, as I worked at every possible position within the four walls. My 28 years of experience with the company helped me grow as an operator and a leader. I also held corporate positions, in areas including marketing, training, research and development and, most important, field operations.

Attracting great employees and great managers. Talent is the number one priority for me and I’m continuing my effort every day in this business to build a great team. At first, I thought that by paying more, I would get great managers, but in reality that does not always equate in a franchise environment. I found out that talented employees and managers seek certainty in their everyday role and want to contribute to the company’s success.

As a franchisee, it is important to be self-motivated and passionate about the business and to have the ability to attract highly talented people at all levels.

My personal ongoing goal is to see my three kids graduate from college and continue to grow as a franchisee of El Pollo Loco, a brand that I truly believe is uniquely positioned to spread like wildfire throughout the country.

Related: How Wingstop Aims to Fly Above the Fast-Casual Competition After Its Surging IPO