U.S. Navy chief petty officers Woody Poole and Milton Guerrero met aboard a world tour of the USS Carl Vinson, where they became fast friends. After a couple of tours between them, they settled down, in -- where else? -- a coastal city, Charleston, and began an exploration of potential franchises they might buy into. They're now two years into owning a FastSigns franchise, which fills businesses' "visibility needs," from digital signs to decor graphics. For help in getting there, the partners cite the company's generous discount to veterans and invite fellow military vets like themselves to, come test the franchise waters. 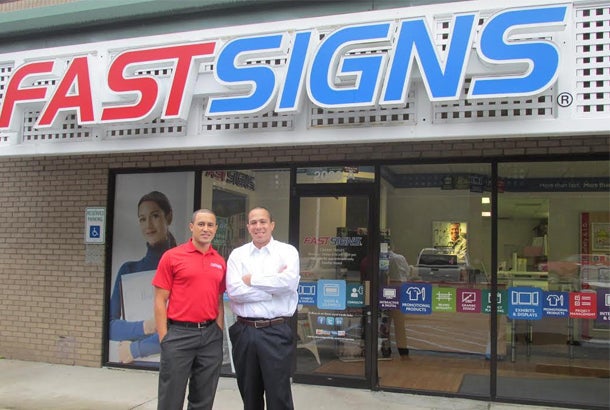 How long have you owned a franchise? Two years.

Milton: The franchise model was less important than the particular franchise. Going into business with the FastSigns team was exciting. From the very beginning, the professionalism, technical expertise and experience of the executives and staff was outstanding. The comprehensive, procedure-driven, well-focused and well-executed business model seemed to be made for former military men like my partner and me.

What were you doing before you became franchise owners?

Woody: Milton and I are both nuclear-trained chief petty officers in the U.S. Navy. We met while on a world tour aboard the USS Carl Vinson and instantly bonded. We ended up serving a couple of additional tours together and always kept in touch.

Woody: There is such a wide array of franchise opportunities available, so to narrow down our options, we determined a handful of key factors that the franchise must meet. These included a set work schedule -- so we could work Monday to Friday, 9 a.m. to 5 p.m; never doing the same thing twice; franchisee satisfaction -- we wanted access to an independent survey to learn about [potential franchisors'] relationships with their franchisees; national advertising funds in which franchisees had a say in how the money was spent; and franchisee support, where corporate was a professional, true partner to all franchisees.

We also looked at how the franchisor described the finances. Through our due diligence, we noticed that some franchises talked fast -- like a used car salesman! -- about finances. It seemed like those companies were only showing you numbers they liked. FastSigns was the complete opposite; its disclosure document featured a detailed Item 19, which is optional for franchisors to include and shares financial-performance information. FastSigns also provided justified explanations for anything we questioned.

Finally, we wanted to see a company that showed professionalism and was approachable. This being our first time as franchisees, we wanted to join a system that was professional in all aspects of the business and whose executive team was deeply connected with the entire franchise system.

Woody: I was floored when I met FastSigns International, Inc.’s CEO Catherine Monson at the International Franchise Expo. Typically, you meet folks in franchise development at franchise shows. This proved to us how approachable the company’s executives are and the value they place on growing with the right franchise owners. FastSigns instantly stood out from the rest. We were blown away by the business model as well as the great resources and ongoing support they provide franchisees.

Milton: Through the FastSigns veterans program, we received a 50 percent discount off the franchise fee, which other military veterans can benefit from, and saved $22,250. The build-out of our space was about $65,000, and the initial lease of the building was $2,624 for the first month and security deposit.

Woody: We received a lot of advice from family members, close friends and former business owners. The franchise also provided a good amount of mentoring within the system. Many FastSigns franchise owners have been tremendously helpful.

Related: Franchise Players: This Customer Bought a Franchise to Save It From Closing

Woody: Hiring employees. When interviewing someone, we always tended to think about the person’s skill set, capabilities and potential: how we saw them growing with our business and where they would be in a few years. We were optimistic about their potential, but have been very disappointed on a few occasions with people quitting after we invested a lot of time and money in their training.

Milton: Definitely take the time to find the right franchise. I’ve heard a lot of horror stories about people who didn’t choose the right franchise and get the right support. You have to do your homework and be diligent about finding the right opportunity for yourself. Don’t be afraid to ask questions.

Milton:  Sales and expanding our in-center production capabilities with the acquisition of new equipment. We have developed a great team, and now we need to continue to drive sales and maximize their productivity. The business community here in Charleston, South Carolina, is just booming, and we must increase our productivity to increase our market share.