Despite a Major Move, From Mortgages to Steaks, This Franchisee Never Bit Off More Than He Could Chew

Financial trouble was brewing, and Sonny Nguyen knew it. So, just before the Great Recession hit, he got out of the mortgage lending business at Countrywide and leapt the wide business gulf between mortgages and flame-broiled meat -- though he'd never been in restaurants or franchising before. His culinary choice? The Flame Broiler concept ."I fell in love with the brand," its fresh, simple food and corporate support system, Nguyen says today. As for a location, his choice was Lake Havasu City, Arizona, where he'd vacationed, and where he saw a need for The Flame Broiler concept. Starting a new business at the height of the recession -- and then adding a second restaurant, in Las Vegas? Challenging, this new restaurateur allows. But hardly impossible. 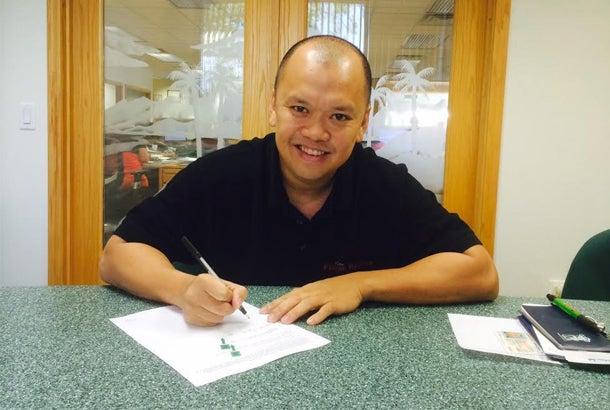 I opened my first location in Lake Havasu City, in May of 2007.

Related: How a Love of Healthy Food Led to a Beneficial Career Change

Before I opened my restaurant, I knew I wanted to go into business for myself but did not want to start from scratch. Franchising gave me the opportunity to be my own boss and run my own business with a system, infrastructure and procedures already in place to set me up for success.

I worked in the mortgage lending business as an account executive for Countrywide. While this was very lucrative, I sensed the industry was becoming overly saturated and competitive because so many people were getting involved. Ultimately, I got out just before the recession hit.

Why did you choose this franchise?

While working in the mortgage industry, I lived in Orange County right next door to a Flame Broiler restaurant. Once I visited for the first time, I fell in love with the brand and thought it was a great concept. What drew me to the concept most was that the corporate team isn’t in business for the money, and genuinely want to help people by providing simple, healthy and delicious food at an affordable price point. Additionally, the CEO and founder, Young Lee, allowed me to be the first person to bring The Flame Broiler [to a locale] outside California, without any previous restaurant experience.

Before making my final decision to open up my first Flame Broiler restaurant, I spoke with various existing franchisees about their experience owning the concept. Additionally, I asked a lot of questions, in my various conversations with the corporate team, as I did not have any restaurant experience. Lastly, I spoke with family and friends who owned their own businesses for tips, support and advice.

Related: Giving Back as a Jersey Mike's Franchisee

The biggest challenge I had in opening my first store was learning the ropes of the restaurant industry. Something else that has been a challenge with both my Lake Havasu and Las Vegas locations has been brand awareness because they are the only stores in the market. We’ve been lucky that there are many people from Southern California who know the brand well that come in often; and that has helped in attracting others as well.

It is important to research a number of concepts. Once [you are] in conversation with the corporate team, make sure that their values match your own and that they are a good fit for you and your family. Additionally, have enough money set aside to pay all your fixed business expenses such as payroll, rent, etc., for up to six months, in case construction falls behind schedule, or business is slow until you build momentum.

What is next for you and your business?

I have plans to expand The Flame Broiler’s presence in Las Vegas by opening at least three to four additional locations in the market. It is my goal to bring the same brand awareness that is in Southern California to Las Vegas.

Related: Each Thanksgiving, This Franchisee Stops Selling and Starts Serving (From the Heart)

Want to Franchise Your Business? Here Are 5 Key Things to Consider.