Franchise Players is Entrepreneur's Q&A interview column that puts the spotlight on franchisees. If you're a franchisee with advice and tips to share, email franchiseplayers@entrepreneur.com.

Bill Papiernak was a minor league baseball manager for 17 years with the Flying Squirrels -- nice name! -- in Richmond, Va., before he hung up his glove for good last April to work full-time on his own business. That business is the B2B office supplier and franchise company Cartridge World. "I am one of the luckiest people that I know, having had the opportunity to work in a job that as a child you dream about," Papiernak says of his long tenure with America's pastime. Now, however, he's on to other things, growing a business so he can spend more time with the team he loves the best: his family. 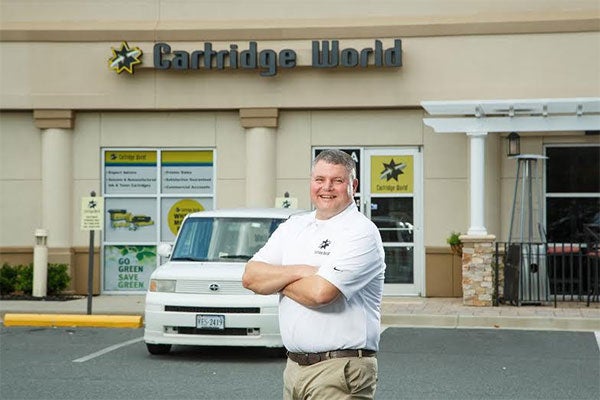 I have owned Cartridge World of Glen Allen, Virginia, since February 24, so for almost a year.

Franchising provides a proven formula for success. The support that the corporate office provides to the franchisees is vital to our success, and it allows us to accomplish what otherwise might be impossible without their support.

I worked in professional, minor league, baseball for more than 17 years. Most recently, I was the general manager of the Richmond Flying Squirrels, an AA affiliate of the San Francisco Giants, up until 2015 Opening Day, last April. I am one of the luckiest people that I know, having had the opportunity to work in a job that as a child you dream about. (Having just gotten my third World Series Ring in the last five years isn't too shabby either!)

My previous job led me on a path to finding a new career that provided the ability to begin working for myself, ultimately allowing me to spend more time at home with my family.

Cartridge World of Glen Allen was well run by the previous owners; I purchased an existing franchise that had been in operation for 10 years, and I was able to step into something that already had a successful track record. As a company, Cartridge World is very B2B focused, and that allows me the ability to utilize many of my same contacts within the region and grow the business. The B2B aspect was the driving force behind the business specifically.

Before investing in Cartridge World, I spoke with a few people who had some knowledge of office-products businesses, but the vast majority of my research was done online. It is amazing how much information is available to you on the Internet if you just spend some time and dig around. Fortunately, I already was well-versed in the business community and area, which made the transition to business ownership smooth.

Related: Franchise Players: How This 'Computer Mom' Became Franchisee of the Year

In my previous profession, I had been used to having a much larger team surrounding me to take care of some of the more mundane tasks that were now falling on me. I have also had to adjust to a much more limited budget for everything.

Do your research and be sure you are making a decision that you can be happy with 10 years down the road, because owning a business is similar to a marriage and you have to love your partner.

What's next for you and your business?

I hope to grow my business to a point where I can take a step back and no longer work in day to day but rather focus on the more long-term, strategic plan for the business. In other words, work on the business, not in the business. But, first and foremost, my priority is growing the business, because nobody ever got in trouble for having too much revenue!

Related: Franchise Players: This Customer Bought a Franchise to Save It From Closing