Franchising can be a great model, but it's not the only option.

By Jason Daley December 8, 2016
This story appears in the December 2016 issue of Entrepreneur. Subscribe »

For many brands hoping to expand, franchising is a great model. But it's not the only (or always the best) option. Here, we follow two similar entrepreneurs as they choose different paths to growth -- one going into franchising and one the other licensing his brand to dealers. 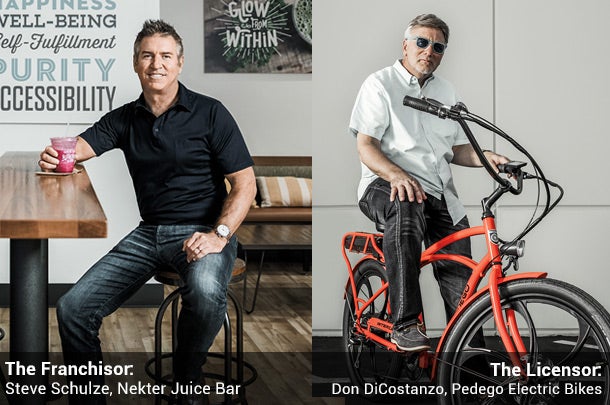 The Franchisor: Steve Schulze, Nekter Juice Bar
A marketing exec., Schulze founded Nekter in 2010 with his wife, Alexis, a teacher. The idea was to meet the need for an affordable and pure juice brand with no additives. Nekter now has 62 units (20 franchises, 42 company stores) and aspires to be "the Starbucks of juice."

The Licensor: Don DiCostanzo, Pedego Electric Bikes
A longtime auto parts executive, DiCostanzo built his own electronic bikes and created a store to sell them. He briefly toyed with franchising the stores, then decided that wasn't a good fit. Today Pedego sells at 87 licensed dealerships across the U.S., Canada, Mexico and Europe.

Upgrading from a small business to a chain is a big leap. So before choosing how a company will grow, owners should figure out their management style and ultimate goals. "We tell our clients, "You really don't want to make a decision to franchise. You want to make a decision about how to run your business,'" says Mark Siebert, CEO of the iFranchise Group, a consulting firm that helps small businesses take that leap. "From a business perspective, there is very little difference between establishing a good franchise program and establishing a good dealer program. The tools and the strategies are largely the same."

Related: Should You Open a Second Location Before You Franchise Your Business?

Steve and Alexis Schulze of Newport Beach, Calif., were hard-core home juicers. They didn't like the processed ingredients, additives and sweeteners they found at health food stores and juice chains. Their personal experiments led to coconut-water-based drinks they deemed tasty enough to share with the masses, and they launched Nekter Juice Bar in Costa Mesa in October 2010. They figured affordable, locally sourced juices, smoothies and bowls with no preservatives or refined sugars would do fairly well, and thought they might even be able to open a handful of Nekters in Southern California. The demand exceeded their expectations. "We've seen a seismic shift nationwide in the care people take with their mind and their body and what they put in it," says Steve.

Soon they were expanding to Texas, Arizona, Nevada and Colorado, all by opening company-owned units. That meant Nekter footed all the costs of building and operating a store and paying its general manager. Brands that follow this model, like Starbucks or Chipotle, are potentially more profitable down the road, but they're expensive to get off the ground, often necessitating taking on debt or bringing in outside investors. In 2012, the Schulzes started seriously considering another growth model: franchising. They'd be on the hook to provide operating instructions, trademarks and ongoing support for individual entrepreneurs building and running one of their stores, but they wouldn't have to invest any cash. In return they'd receive a monthly royalty.

Biking to the beach wasn't a problem for Orange County entrepreneur Don DiCostanzo -- but getting back home, at the top of a steep hill, was way too tough. So he bought an electric bike. It was a revelation; pedaling it still gave him plenty of exercise, and the motor helped "flatten" the hills. Enthused, he opened an electric bike shop. But then his enthusiasm also flattened: He just didn't love any of the bikes on the market.

To build something better, in 2008, he enlisted his friend and amateur bike-tinkerer Terry Sherry. The result was Pedego Electric Bikes, a stylish line ranging from classic commuters and mountain bikes to cargo and tandem rides, retailing between $2,000 and $3,000. He found traditional shops to carry them, but the product just didn't sell. "It turned out bicycle shops were a terrible place to offer our products because they didn't believe in electric bikes," says DiCostanzo.

Related: Why You Should Make the Move to a Multi-Unit Franchise

The business partners knew there had to be another way to reach critical mass. That's why they created Pedego-branded stores. They chose to license so they could focus solely on manufacturing and selling rather than having to expend energy supporting and growing a franchise. Their first dealership was in Huntington Beach, Calif., in 2011. Every licensing deal differs slightly. In their version, an independent dealer with $75,000 in available cash to invest in setting up a store receives the rights to use Pedego's name and agrees to exclusively sell the e-bikes. The founders make money by selling wholesale. Though some licensors charge an annual licensing fee, Pedego does not. The model worked. After four years, Pedego had dealers selling and renting bikes from California beach towns to Colorado ski towns to the East Coast -- each store run by individuals who had researched the local market to appeal to specific communities, something a chain or a franchisee would struggle with.

Step 2: Picking a path, then adjusting.

"Whenever you allow a third party to use your brand, you need to exercise some control over how that brand is represented to the public," says Siebert. "Any increase in control always carries costs for the franchisor or the licensor."

In 2012, Nekter began to franchise -- but tentatively. It awarded six stores and wanted to wait two years before deciding whether to open more. In six months, however, the stores were thriving, and the Schulzes say they had "an avalanche" of inquiries from other interested candidates. So they sold additional stores to a few of the original six but stuck to their plan not to take on any new franchisees -- yet. They had heard an off-putting number of stories of franchise brands that grew too fast, then crashed and burned. To avoid meeting a similar fate, Nekter spent 2015 working with franchise experts to strengthen their materials, update legally required disclosure documents and research which markets to expand to with franchisees and which to fill with corporate stores. Now they're accepting applications for new franchisees. Over the next three to five years, Nekter hopes to add 100 company-owned units and 200 franchised units to its 62 existing stores.

Pedego was growing quickly, but industry advisers felt money was potentially being left on the table. In licensing, money is made only by selling bikes. The more the dealer sells, the more they order, and the more Pedego makes. But if Pedego switched to a franchise model, there would be additional revenue sources not available to licensors, including a franchise fee and steady monthly sales royalties. This, compared with a check only when a dealer buys new product seasonally, was tempting. So DiCostanzo hired iFranchise Group to help prepare to franchise. After months of work, DiCostanzo and Sherry took part in a two-day training seminar, where they learned the number one requirement of franchisees was that they follow orders and do exactly what they're told. Sherry pulled aside DiCostanzo to say that this wouldn't really work with their current dealers, who had the freedom to hold sales and promotions, decide on store locations, and even set their store hours as they saw fit. Requiring dealers to follow an operations manual or corporate-mandated store hours would hurt these relationships, so DiCostanzo and Sherry gave up on franchising entirely.

Related Book: Franchise Bible: How to Buy a Franchise or Franchise Your Own Business by Rick Grossman

Sure, they thought, the downsides of licensing would always be with them. If DiCostanzo ever wants to sell the company, for example, it would be worth less than a franchise with a recurring revenue stream. And he knew that, as opposed to franchising, licensing would always leave him in the dark about his company's health: He can't look at his licensees' books for financial trouble. But there were also positives. Licensing involves less expensive legal paperwork (both here and overseas), and it avoids any complications or animosity created by disputes over discrepancies with royalties, which are quite common in franchising. "We didn't want to create that antagonistic relationship," says DiCostanzo.

Step 3: Now it's all about growing bigger.

Once a franchisor or licensor (or any entrepreneur) is committed to a direction, success hinges on the same basic things. "One of the biggest roles a franchisor must have is to create a corporate culture by whom they hire, the priorities they set, and the actions they take," says Siebert.

Once the Schulzes got past their fear of growing too fast, they took on another concern: As they added more franchises, would they dilute the spirit of their company? A franchisee who didn't buy into their culture or values could, it seemed, short-circuit everything. So the couple developed a program to keep all their units humming the same tune. The Schulzes put themselves forward as brand ambassadors wherever they went, emphasizing their company values with every franchisee and customer they met. They created a hiring program that focused on finding people passionate about health, and they began offering yoga and pilates classes for corporate staff, to keep everyone focused.

So far, the Schulzes feel this approach is working. As they prepare to bring a whole new generation of franchise owners into Nekter, they've moved their corporate headquarters into a 15,000-square-foot facility and added a layer of in-house support staff -- including accountants, supply-chain managers and coaches -- to help franchisees keep their costs in line, their profit margins high and their enthusiasm for the brand up.

DiCostanzo's flirtation with franchising helped him see just how closely Pedego's success is linked to his specific dealers. And the more he thought about it, the more he felt he'd found a business model that attracted the right people. Many franchisees are, after all, basically interested in opening any kind of business. But because licensees have to do a lot more of the work themselves, the ones Pedego found are total e-bike enthusiasts.

As Pedego has grown, DiCostanzo even discovered a benefit he didn't expect: He's never had to advertise to actively seek new dealers, because most of them started out as customers. "We went from one store to 87 locations in about four years, and we think next year we'll add another 50. And it's all 100 percent organic," he says. He encourages his dealers to connect with customers over their mutual passion. "Sharing their life experience is part of the model," says DiCostanzo. "That enthusiasm and entrepreneurial spirit is what drives us beyond any of our competitors."