In its fourth season on HBO, the actor from the hit series 'Silicon Valley' talks about being okay with failure, his hatred for the phrase 'grilled to perfection' and four business ideas for founders.

Silicon Valley actor and former entrepreneur Kumail Nanjiani shares his tips on entrepreneurship, entertainment and success. Nanjiani knows a thing or two about technology and business -- before becoming a successful actor, he worked in the tech world himself. From making a major career change to risking it all, here's what you can learn from the Hollywood star.

The new season of Silicon Valley is airing now. How have people who work in the real Valley reacted to the show?
They never think it’s about them. They think it’s about the people around them. They’re like, “Oh, yeah, you guys are so right -- these people are crazy.” And we’re like, “No, you’re crazy.” Which is kind of perfect. No one is offended, but everyone thinks it’s accurate.

Is it true you were part of the tech world before you got into comedy?
Yeah. I worked at the University of Chicago for a couple of organizations that did research on public schools.

Like what?
Well, there was one charter school where their whole thing was technology. Every sixth-grader had their own MacBook. These kids who had never had a computer suddenly had these computers they were banging around and pouring apple juice into. It was my job to keep them functioning.

How’d it go?
It was an impossible job from the beginning. There were way too many computers. I was one guy, and these were kids -- they were reckless with them. And the curriculum depended on these computers working. Everything was sort of stacked against me. Plus, I was really bad at the job. They never had a shot.

Good thing you switched jobs. There are a lot of parallels between being a comedian and being an entrepreneur, one of which is having a pretty high tolerance for risk.
Yeah. You have to take that leap of faith and be like, All right, this is risky, and I’m probably going to fail a bunch of times. You just have to hope that the failure-to-success ratio is something you can withstand.

Any advice for someone looking to make a big change?
Don’t be afraid of failure. That’s the biggest thing I’ve learned. Most people don’t really do too many things because they’re afraid they’ll fail. There are people failing all the time, all around you. And nobody is going to notice your failure. Your failure is not going to be so spectacular that people write news stories about it. Your failure will be boring. 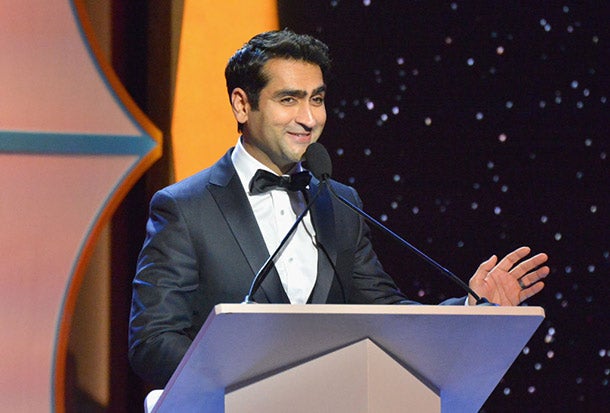 “Most people don’t really do too many things because they’re afraid they’ll fail. Nobody is going to notice your failure. Your failure will be boring.” -Kumail Nanjiani
Image credit: Getty Images / Charley Gallay

You star in the movie The Big Sick, which you co-wrote with your wife. Is it hard to live with your coworker?
Well, it was really good in this case because she’s a really good writer and we have different strengths. She’s very motivated, so when we’d give ourselves deadlines, she kind of kept me honest. But when you’re living with the person, it can also be tempting at night when you’re lying in bed to be like, “Hey, I had an idea for this thing.” So we made a strict rule that whenever you want to talk about work, you have to ask for permission. You have to be like, “Hey, can I say something about work?” Then: “Yes.” Then you can switch gears. Because it can be very easy to just flow from work to personal to work, and I don’t think that’s very healthy.

Related: What Entrepreneurship Taught One Married Couple About Partnership

Who said, “No, you can’t talk about work” more?
She did. She’s emotionally very intelligent, whereas I’m like a child. When I think of something, I get impatient and I want to do it now. And she’s like, “It’s fine; there’s time to do that later.”

You came up in an age where comedians don’t have to wait for someone to put them on TV -- they can just post on YouTube. What do you make of that crop of YouTube stars?
I don’t want to generalize, but the target audience for a lot of the YouTube people is fairly young -- under the age of 16. You still want to know what those people are watching, because I think it’s interesting, but sometimes it just makes you feel old.

Does it pain you when you see something that’s horribly unfunny and it has a billion views?
Honestly, it’s hard to not be bothered by it a little bit. It’s natural. But my friend [comedian and Crashing star] Pete Holmes gave me this advice when I first moved to New York. He said, “The only advice I’m going to give you is: Don’t compare yourself to other people. Don’t look at someone else and be like, ‘Why does that person have that? Why don’t I have that?’ or ‘They don’t deserve it; I deserve it.’” He said he’s seen that eat people from the inside, and you see that all the time. So I decided, no matter what, don’t compare your career to someone else’s career. I do make an effort to do that, and I feel like I’ve been very successful at not getting bogged down by anyone else’s success. That said, sometimes you see something that’s really stupid with 20 million views and you think, Why am I doing this? Why does it matter?

There’s no accounting for taste.
I mean, think about when you were 12 or 13. The stuff I watched was awful! I tried to watch a He-Man cartoon recently, and I was like, “Oh my God!” I just had, like, a small brain. I was stupid.

No matter how big their successes may be, many entrepreneurs are driven to do more and more, rather than just taking their millions and calling it quits. Are you like that?
I’m the exact same way. For me, once something is done, it disappears and all the glory of it means nothing. I remember I worked really hard to get onto Letterman, and then as soon as I did the set, I was like, All right; that’s gone. What’s next? I’m constantly looking to the next thing. My wife always says, “You need to enjoy success when you have it.” And I really don’t. Like, literally, we finished working on the movie today and I’m like, OK; what’s the next movie?

Final question: You recently tweeted, “I’m done with the phrase ‘grilled to perfection.’” Do you care to elaborate?
I just hate it! They always say that, and I’m like, You know what? I’ll be the judge of that. You can’t just throw that around. That’s a very strong statement. It’s perfect every single time?

Related: Perfection Is the Greatest Obstacle to Productivity

“I used to like to come up with inventions because I hated working so much when I had my day job,” Kumail Nanjiani says. “I thought, All I need is a great idea and I’m out of here.” Since many entrepreneurs have the energy and the desire to do something big but not always the idea, we asked him for a few of his.

Edible Candle
“I always wanted to make a birthday candle that’s made of caramel, so when it melts, it just melts onto the cake, and then there’s no wax on the cake.”

"Flirtr" (An app)
“It’s like a Cyrano de Bergerac kind of thing, where if you’re talking to someone, it will suggest interesting topics to you and give you some funny lines.”

"Trembl" (Also an app)
“It plays scary sounds on your phone so you don’t get mugged.”

Revenge Werewolf (A video game)
“You’re a human being during the day and people are mean to you and stuff. Then at night, you’re a werewolf and have to go kill all those people that were shitty to you during the day.”

Entrepreneur is not responsible for any financial or reputational losses associated with these business ideas.
*Maybe?