How Taco Bell Is Becoming the World's Most Innovative Franchise

Let's take a glimpse at how the fast-food giant has maintained its globally iconic position.

By Lisa Fei February 5, 2021
Opinions expressed by Entrepreneur contributors are their own.

Taco Bell, the Mexican-inspired fast-food chain, is quickly adapting for a new era of food culture. As trends shift in the ever-changing food market, Taco Bell has developed several innovative new services to maintain dominance in the quick-service space. Facing pressure from competing brands, the company has announced new restaurant concepts, convenient food delivery services and a unified digital experience to draw in consumers who are eager for grab-and-go convenience.

Starting in 2004, Taco Bell struggled to compete with competitors, including similarly themed restaurants like Chipotle or Del Taco, as seen in how the chain suffered financial and public relations failures in the attempt to establish locations in Mexico and Dubai. Despite this, the chain saw same-store sales growth of 6% in the fourth quarter of 2019, likely related to the expansion of restaurant technology and innovative services.

Let's take a look at how the fast-food chain has undertaken significant efforts to vie for the throne and attain the #1 spot on Entrepreneur's Franchise 500 list.

In August 2020, Taco Bell announced Go Mobile, a suite of technological and restaurant advancements. New "Go Mobile" locations will minimize space and prioritize convenience as the fast-food industry shifts towards digital kiosk and app-based ordering methods. New locations will also include a Dual Drive-Thru, which provides a new lane for customers who submit orders using the Taco Bell app. To increase convenience, curbside pick-up has been expanded for customers who seek an alternative to a traditional dine-in experience.

As food-delivery services gain dominance, Taco Bell announced a partnership with Grubhub to keep pace with competition. Since 2019, users nationwide have been able to order directly from the Taco Bell menu and receive delivery from Grubhub. Taco Bell also announced limited free delivery options to celebrate the launch of the partnership. In addition to convenient delivery options, Taco Bell has also integrated Grubhub technology into point-of-sale kiosks in more than 6,000 locations. 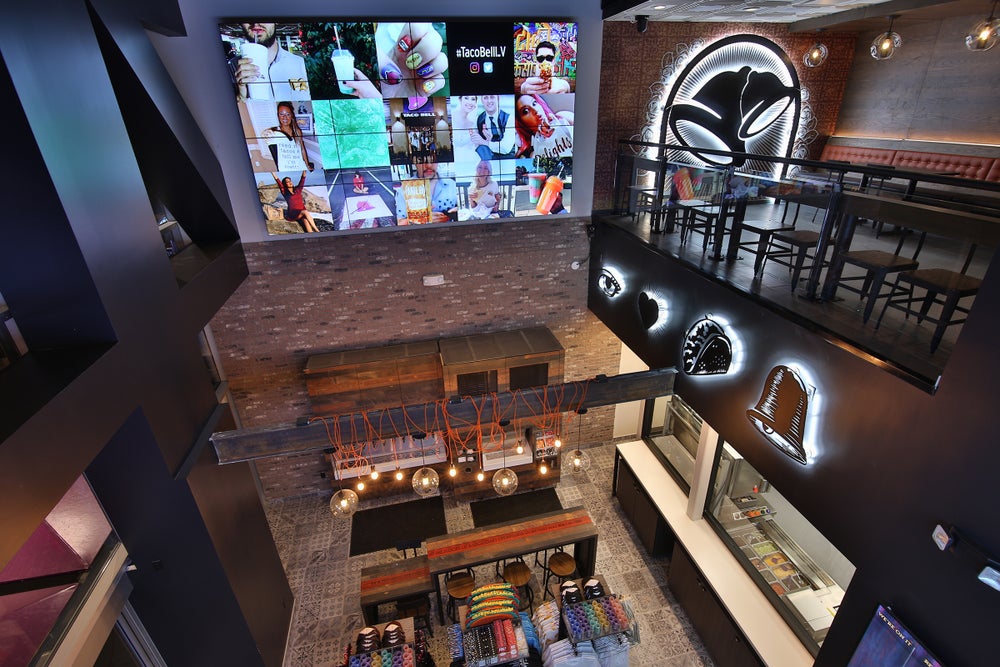 Creative menu partnerships with other brands

Taco Bell has been lauded for imaginative menu items, which often play upon partnerships and associations with established brands like Frito-Lay and Doritos. Ideas to combine tacos with popular chips are born in Taco Bell's Insights Lab, a state-of-the-art food development lab in Irvine, California. As a part of the brand's commitment to innovation, Taco Bell has created an intra-company culture to match.

In January 2021, it was announced that Taco Bell would partner with Beyond Meat to expand its plant-based offerings. Beyond Meat has become known for creating meat substitutes for popular fast-food offerings and is said to be in collaboration with Taco Bell to develop exclusive plant-based protein menu items.

An innovative brand in the food space, Taco Bell has also cultivated a significant social media footprint. According to trade publication QSR Magazine, Taco Bell is graded highly across multiple criteria, placing higher than 12 other brands in the food-and-beverage industry.

Investment in influencer and viral marketing

In addition to traditional advertising and marketing campaigns, Taco Bell has also invested in influencer and viral marketing. In 2017, to celebrate the launch of a new menu item, the brand hosted launch events at cities across the United States, encouraging visitors to share photos of their experience on Instagram.

Fast food chains are thriving now more than ever, with customers prioritizing convenience and technology integration. To adapt to a changing environment, Taco Bell has undertaken a significant refresh of core services, all while maintaining creativity and providing diverse food experiences to consumers.