This Millennial Couple Bought a Campground Before They Owned a Home

Kathryn and Alan Berta wanted more adventure in their lives, so they bought a Kampgrounds of America franchise in Vermont.

By Chloe Arrojado March 3, 2022
This story appears in the March 2022 issue of Entrepreneur. Subscribe »

As much as Kathryn Berta enjoyed living in Boston and working for a startup, one of her biggest joys was traveling elsewhere. She and her husband, Alan, would pack up their camping gear and road-trip to different Kampgrounds of America sites around the country. During one trip, a campground owner jokingly offered to sell them the business. Berta laughed it off, but it sparked something in her. She couldn’t shake the idea.

The couple started actively looking for campgrounds in 2017, and in 2019 they purchased one of KOA’s 500-plus campgrounds in East Dummerston, VT. Their decision surprised many of her family members and friends, especially since the couple bought a franchise before they’d even owned a home. But three years into the adventure, 31-year-old Berta likes the flexibility that their life allows: She splits her time between the campground and, of course, even more travels with her husband and daughter.

You’ve camped at many KOA campgrounds. Is owning one what you anticipated it to be?

Every campground is different. You don’t know until you’re really in it. Dealing with my first grumpy customer was really tough for me. I had to learn that you don’t know what people are experiencing on the road when they’re on their way to you. Being able to change, figure out what they need, and give them what they need on the fly was something that I had to learn.

Luckily, there’s an amazing support system at KOA. I can’t tell you how many times I’ve reached out to other KOA owners to just get their input. Some of them have been in KOA for 40, 50 years. No one’s going to get the chaos and the excitement of something like this but another franchisee owner: They get excited with you.

Related: The Time Is Now to Become A Franchisee Under Historically Good Terms

Figuring all of this out during the pandemic surge of campers must have been difficult.

We weren’t really prepared, because this influx of campers came fast and furious. We just tried our best, and in the end it came down to managing people’s expectations. A lot of these new campers didn’t understand check-in time. I had awesome employees who were patient and did a lot of phone calls for camper education.

Also, unfortunately, there were shortages on everything. We’re one of the only places you can get RV supplies in the southeastern Vermont area. I always found it important to work with as many local distributors and contractors as we could. Building that trust with these people as an outsider was difficult. You have to take a chance on them. They have to take a chance on you. 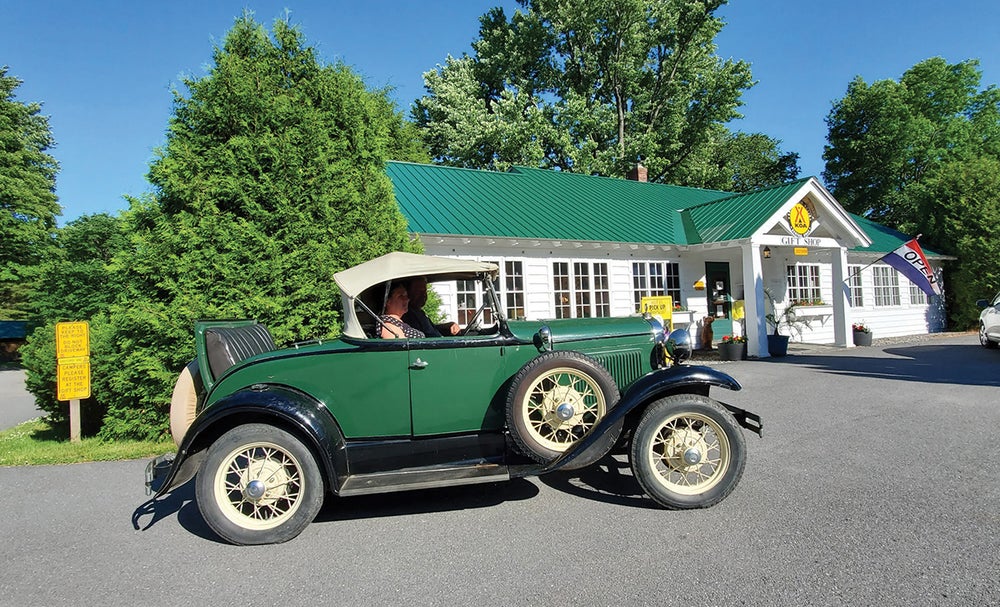 Berta had never owned a home before buying a KOA franchise in East Dummerston, VT. But the campground came with a home.
Image Credit: Kathryn Berta

How do other operational things, like marketing, work with a campground?

I continue to work on our social media to stay relevant. KOA also sends local bloggers and influencers to our campgrounds. So that’s been really helpful. When I worked for other brands before buying the campground, influencers were important to building brand recognition. So it was on my radar when we started our own business.

Related: Why You Should Buy a Franchise Instead of Starting Your Own

It seems unconventional to buy a business before buying a home. What was your thought process?

[My husband] and I always believed that there’s nothing wrong with renting, especially because we didn’t know exactly where we wanted to land. So we didn’t feel it was right for us to invest in buying a home when, maybe in five years, we wouldn’t be there.

The perk of owning the campground is it came with the home. And because we didn’t have to unload any property, it made it really easy for us to move quickly once we found the campground that we knew we wanted and loved.

In the end, we got the campground, two awesome dogs, and we have a daughter now. To us, this is truly fulfilling the American Dream. We’re business owners, we run our lives … how much better can it get?